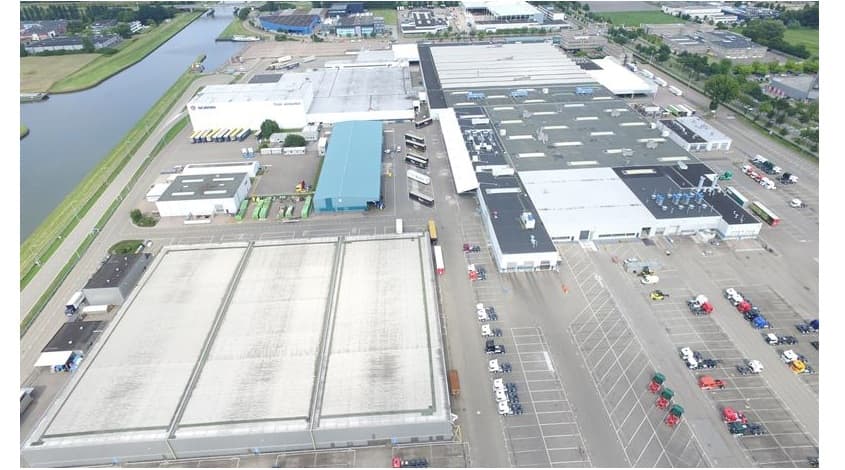 Zwolle production unit gets solar-powered roof equivalent to the size of nearly eight football pitches, bringing it nearer to the goal of being carbon neutral by 2020.

Scania has taken its latest significant step in its transition to using exclusively renewable energy in its production activities.

The company’s production unit in Zwolle, Overijssel, will install the largest solar roof in the Netherlands. The solar roof will have 22,000 solar panels with a total energy capacity of six megawatts.

“Scania is committed to reducing its carbon footprint and throughout the organisation we are now taking initiatives similar to those in Zwolle to enhance energy efficiency. We have set ambitious targets and are well on our way to achieving carbon neutrality,” says Ruthger de Vries, Executive Vice President for Production and Logistics.

The roof is just one of several initiatives that Scania has taken in Zwolle for the production unit to reach carbon neutrality by 2020. One example is wind power. In September 2016, Scania Nederland started collaborating with the Dutch citizen initiative ‘Blauwvinger Energie’ and Windesheim College, to build three wind turbines by the Zwolle-IJssel canal, two of which are due to be built two of those wind turbines on the Scania factory area. The turbines for the project ‘Windenergie in Zwolle’ have a capacity of two to three megawatts each, while the hub height and rotor diameter of the turbines are 100 metres.

The solar roof has been welcomed by the local authority. “Scania is amongst those leading the way in energy,” says Annemieke Traag, Member of the Executive Council of the Province of Overijssel for Energy, Environment and European Affairs.

“As a major employer in our province, Scania is manifesting that it takes energy transition very seriously.”

In reaching its 2020 target, Zwolle would become the first Scania production in the world to become energy-neutral, but the company as a whole is committed to reducing its environmental footprint throughout its production processes. Scania is a signatory to the UN Global Compact, which has now been complemented by Agenda 2030 and its sustainability goals.