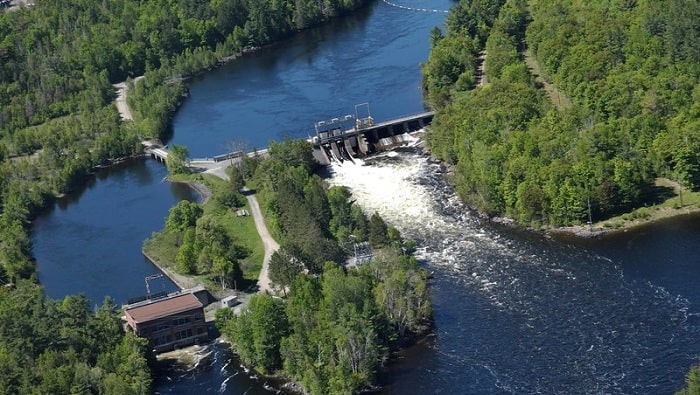 The $136m rebuilt project will replace the now out-of-service, 4.8MW century-old powerhouse, which was damaged in 2018 by a tornado. The new higher capacity powerhouse will be positioned about 50m upstream from the existing building.

The forebay, the pool of water that will feed into the station are also be redesigned for more efficient operation.

Ontario Power Generation renewable generation division project manager Kevin Kaczmarczyk said: “The whole site has had to be redeveloped for this rebuild. It’s so much more than just a building. We had to make sure all the hydraulic conditions are satisfied, and the entire forebay had to be reshaped and opened up.”

Expected to come into service in 2022, the new, two-unit station will be powered by the water from the Madawaska River, doubling the capacity of clean, hydropower generation from the present 4.8MW to nearly 10.7MW enough to power nearly 10,000 Canadian homes.

OPG selected SNC Lavalin for the design of the new station, while M. Sullivan & Son will handle the construction. Local workers from First Nations have also been hired for jobs ranging from carpenters, operators, labourers, and truck drivers.

It is claimed that the Calabogie site had not taken the full advantage of the volume of water coming from the upper Madawaska River. As per the new plan, more water will be sent through the powerhouse, with capacity increased to 160m³ per second from 66m³ per second. Water levels and flows are also not expected to change as per the existing Water Management Plan.

The preparatory work done earlier this year included the old tornado-damaged powerhouse to be left standing in place, to act as a barrier to keep the new site dry.

Other works included widening and strengthening roadways for dump trucks and clearing the site of vegetation.

Earlier this month, contractors have started working under physical distancing guidelines amid Covid-19 pandemic, which included excavating the existing forebay, moving tonnes of rock and sediment.

OPG also stated that there will not be any flooding associated with the rebuild and the overall footprint of the new site will remain on 10 hectares of area.