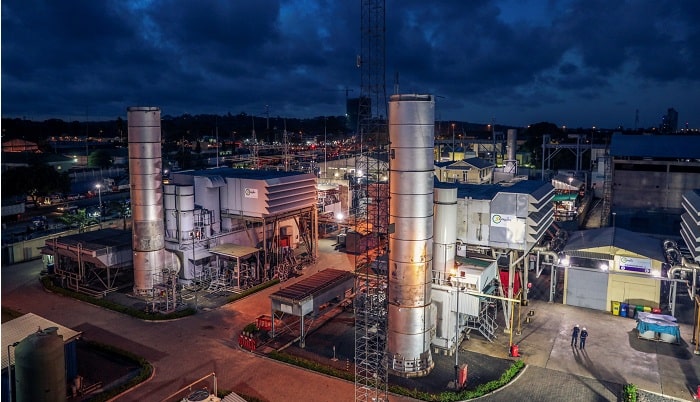 GE and Songas announced they have successfully completed upgrades to the entire GE fleet of three LM6000PA and one LM6000PC gas turbines at the Songas Ubungo Power Plant in Dar es Salaam, Tanzania. These technology upgrades will increase the power plant’s efficiency and reliability, enabling Songas to maintain the plant in the most economical way possible.

“We are very pleased with GE’s execution because it was completed safely and ahead of schedule, with great commitment and consistency across the four LM6000 units,” said Nigel Whittaker, managing director, Songas Ltd. “The successful completion of this project not only improves Songas’ performance levels, but through the additional reliable supply of electricity, continues to contribute to the economic development of the country, making a significant difference in the lives of Tanzanians.”

“Over the past 15 years, Songas and GE have collaborated on the Ubungo power plant, and we’re excited to help enhance operations, increase capacity, and deliver the principles of safety first, quality foremost and operational excellence,” said Elisee Sezan, CEO for GE’s Gas Power business in sub – Saharan Africa. “Our goal is to bring long-term value to our customers and their power plants, like Songas, to maintain it in the most efficient way possible and, ultimately, contribute to Tanzania’s economic and social development.”

Last year, GE achieved its 100th power plant installation in sub-Saharan Africa and has an installed base of over 300 turbines in up to 22 countries in the region.

About songas
Since July 2004, Songas has been powering Tanzania’s industrialization through the supply of safe and reliable energy. By utilizing the country’s own natural gas resources, the Songas facility continues to supply the most cost-effective energy to the region and provides an alternative source of generation. It is estimated that the Songas facilities have saved Tanzania more than US$6.5 billion by helping to avoid the high costs of importing fuel oil used for power generation and industrial applications.

About GE
GE (www.GE.com) drives the world forward by tackling its biggest challenges. By combining world-class engineering with software and analytics, GE helps the world work more efficiently, reliably, and safely. For more than 125 years, GE has invented the future of industry, and today it leads new paradigms in additive manufacturing, materials science, and data analytics. GE people are global, diverse and dedicated, operating with the highest integrity and passion to fulfill GE’s mission and deliver for our customers. www.GE.com

About GE Power
GE Power (www.GEPower.com) is a world energy leader providing equipment, solutions and services across the energy value chain from generation to consumption. Operating in more than 180 countries, our technology produces a third of the world’s electricity, equips 90 percent of power transmission utilities worldwide, and our software manages more than forty percent of the world’s energy. Through relentless innovation and continuous partnership with our customers, we are developing the energy technologies of the future and improving the power networks we depend on today.