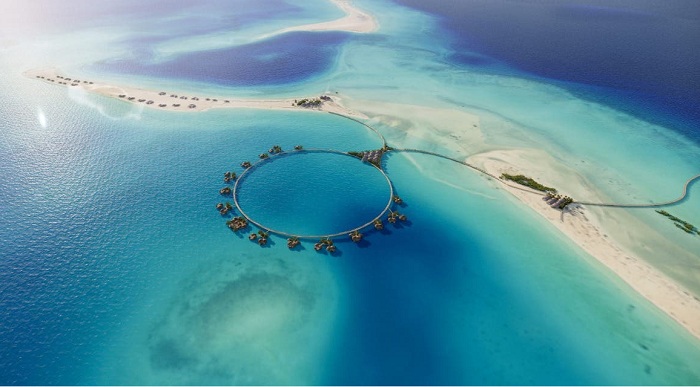 The Red Sea Development Co (TRSDC) said on Monday it has awarded a contract to build and operate renewable power-based utilities for Saudi Arabia’s flagship luxury resort development, the Red Sea Project, to a consortium led by ACWA Power.

Owned by a Saudi sovereign fund and backed by Crown Prince Mohammed bin Salman, the multi-billion dollar project will entail developing luxury resorts on 22 islands off the coral-fringed Red Sea coast and six inland sites, covering an area of 28,000 square kms, the size of Belgium. The public-private partnership agreement is for the generation of up to 650,000 megawatt hours of 100% renewable energy to supply the destination and other utility systems, whilst emitting zero CO2, TRSDC said in a statement.

Energy will be generated through solar panels and wind turbines to meet initial demand of 210 megawatts, with the ability to expand in line with the development.

The deal means the Red Sea Project will be “the region’s first tourism destination powered solely by renewable energy”, TRSDC said in the statement.

The ACWA Power consortium is financed by Saudi and international banks, including Standard Chartered Bank and China’s Silk Road Fund.

TRSDC Chief Executive John Pagano told Reuters the capital investment in the project will worth multiple billions of dollars by completion.

The company is not investing any of its own capital and is instead committing to purchase its utilities from the consortium for the next 25 years, it said.

All utilities for the project, including renewable power, drinking water, wastewater treatment, solid waste management and district cooling, will be delivered under a single contract for hotels, international airport and infrastructure.

Pagano told Reuters last week the company plans to have 16 hotels ready by the end of 2023, two more than initially planned in the first phase, as it expected a swift recovery in global tourism once the COVID-19 pandemic abates.