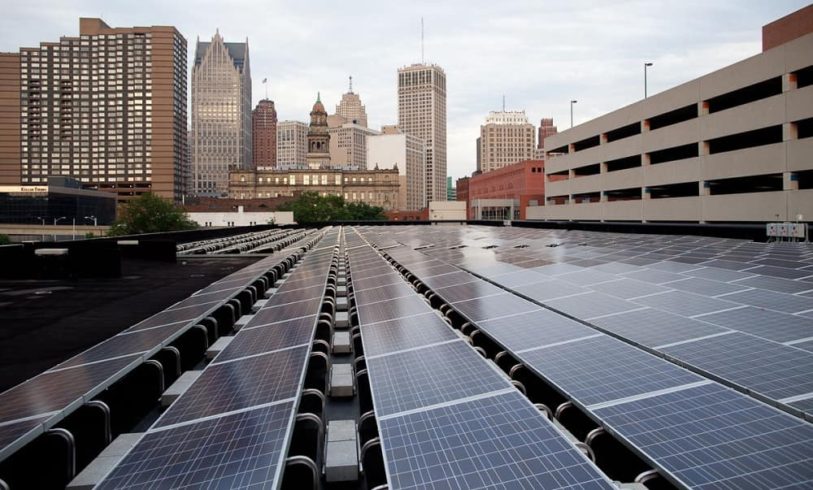 The City of Detroit and DTE Energy, along with community members, will celebrate the grand re-opening of O’Shea Park featuring a renovated park, the city’s utility solar park and green infrastructure. The event, which includes fun activities for families, is set for Saturday, June 8 from 1 – 4 pm at the park, 15870 Capitol at Greenfield.

Renovations at the 20-acre park include resurfaced basketball courts, walking paths, play fields, a community gathering space with seating, new trees and native flower beds. The project also included solar panels installed on more than nine acres along the I-96 and Greenfield edges of the park and the bioretention garden on the Capitol edge of O’Shea. The cost for the entire project was $861,500.

“A few years ago, O’Shea was one of many large vacant areas in the city, with an abandoned, blighted recreation center and largely unused park that were a drain on the surrounding neighborhood,” said Mayor Mike Duggan. “Now, thanks to Gerry Anderson and our partners at DTE, we’ve built a beautiful 20-acre park, with recreation space for residents and a solar park, putting this vacant land back to productive use in a way that improves the neighborhood.”

The O’Shea Solar Park was developed through a public-private partnership between DTE Energy and the City of Detroit. One of the largest urban parks in the region, the project will generate more than $1 million in tax revenue for the City.

“DTE Energy is pleased to have played a role in the revitalization of O’Shea Park. Not only is this good for the neighborhood, it is helping us meet our goal to reduce carbon emissions 80% by 2040,” said Gerry Anderson, chairman and CEO, DTE Energy. “Companies like ours have a responsibility to help strengthen our communities. The partnership we developed with the City to create our solar park adjacent to the renovated playground is doing that.”

The bioretention garden at O’Shea is one of 16 green projects across the city by the Detroit Water and Sewerage Department (DWSD). Green stormwater infrastructure is an approach to managing stormwater that uses the natural processes of soils and plants to soak up water where it falls before it can enter and overwhelm the City’s combined sewer system. DWSD planted flowering perennials and grasses that will thrive in conditions that will be present in the bioretention garden. The O’Shea bioretention area is expected to reduce 1.59 million gallons of stormwater runoff annually.

“The bioretention garden will reduce flooding on adjacent streets with landscaping that enhances the park’s and neighborhood’s features,” said Gary Brown, DWSD director. “A total of 16 stormwater projects we’ve installed or are under construction the past two years manage 61 million gallons of stormwater runoff annually. DWSD is proud to join other City departments and DTE to re-open a revitalized O’Shea Park that offers sustainable features that will benefit the neighborhood for years to come.”

During the event, kids also can take part in a number of fun activities including petting zoo, face painting, balloons, arts-n-crafts, double-dutch demonstration and more. Light refreshments will be served.