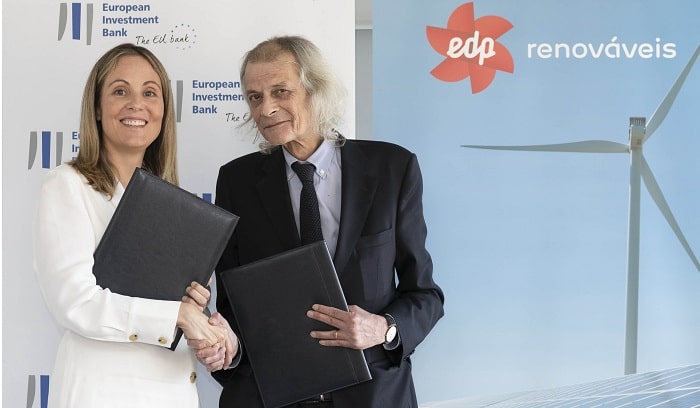 The European Investment Bank (EIB) will facilitate EUR 150m to EDPR Brazil, the local subsidiary of EDP Renovaveis (EDPR), a global leader in the renewable energy sector, to support the development of wind and solar power generation plants in Brazil. This institutional credit will contribute to foster the company’s business plan in Brazil, a country where it has been present for the past decade and where its project pipeline will enable EDPR to produce nearly 1,8 TWh a year of clean energy by 2023.

Thanks to the EIB support, Brazil will be able to lower its CO2 emissions while accelerating the transition towards a cleaner energy mix, in line with the environmental objectives established at COP21.  Moreover, the construction of wind and solar plants will positively affect the country’s economy, reducing energy and fuel import costs while improving energy security and creating employment. In particular, the overall investments supported by the EIB will contribute to create 1,900 jobs during the implementation phase.

This operation, eligible under the Climate Action and Environmental Facility (CAEF), highlights the EIB efforts to finance Climate Action outside the European Union, contributing to the EU’s renewable energy and environmental policies. This project will foster the production of clean and renewable energy in line with the UN Sustainable Development Goals (SDGs), which ensure access to affordable, reliable, sustainable and modern energy while fighting climate change.

At the signature event that took place in Madrid, EIB Vice-President Emma Navarro, responsible for EIB operations in Latin America and for the Bank’s climate action, said: “Climate change is one of the biggest threats to the future of our planet and we need to join forces to tackle it. Today, we are taking a very important step forward in our commitment to support sustainable and inclusive economic growth in Latin America. Thanks to this project, the EU Bank is boosting wind and solar power generation in Brazil and therefore contributing to the fight against climate change. Supporting clean and renewable energy, thus helping to recude CO2 emissions, is a key priority for the EIB in Brazil and in the whole region.”

EDPR CEO, João Manso Neto, pointed out that “this credit line will help us to continue with our establishment in Brazil, a country in the midst of a transition towards a more environmentaly friendly energy mix. In addition to this, we feel especially motivated by the endorsement of an institution of the EIB’s weight, as it supports not only our business line, but all our contribution to progress and development”.

Through this Framework Loan, the Bank will provide a EUR 150m loan to EDPR Brazil, which will subsequently allocate the funds to a series of specific onshore wind and solar PV plants in Brazil. EDPR may additionally seek long-term senior debt from other financial institutions to procure all funds required for the project.

The EIB in Latin America

The EU is the main development partner of the Latin America region, its number one investor and its second-largest trade partner. As the EU bank, the EIB supports the EU’s relationship with Latin America by financing projects that contribute to the EU external policy objectives: the development of economic, environmental and social infrastructure; private sector development; and climate change mitigation and adaptation.

The EIB started its operations in Latin America in 1993. Since then, the EU bank has supported almost 120 projects with total financing of around EUR 8.4bn spread across 14 different countries.

In 2018, the EIB stepped up its contribution to sustainable development and climate action in Latin America, providing EUR 640 million to finance 15 operations: it is the highest number of EIB operations structured in one year in the region.

The EIB, as the world’s largest multilateral provider of finance for climate action projects, has the goal to dedicate at least 25% of its investments to climate change mitigation and adaptation, at least 35% outside the EU, to support low-carbon growth with climate resilience.

In 2018, the European Investment Bank surpassed its climate financing target for the ninth year running, dedicating EUR 16.2bn to promoting climate action, which represents 29% of its total business. Mobilising finance for climate action is one of the EU bank’s priorities. Its goal is to be a leader in mobilising the finance needed to keep global warming under 2°C and to limit the temperature increase to 1.5°C in order to meet the Paris Agreement objectives.

The EIB is the world’s largest issuer of green bonds and was the first to make an issue on this market.

In Latin America, the EIB has become a major promoter of renewable energy having signed projects worth over EUR 840 million in the region between 2013 and 2018.

Climate change mitigation and adaptation is the EIB’s main priority in the region, where projects supports by the EU bank focus on the environment, especially on boosting renewable energy, energy efficiency, and sustainable public transport schemes. Climate change adaptation-related projects involve upgrading existing infrastructures to be more resilient in the face of more volatile and unpredictable weather patterns, preparing it for direct and indirect impacts.

The EIB is the long-term lending institution of the European Union owned by its Member States. The EIB makes long-term finance available for sound investment in order to contribute towards EU policy objectives.2018: Record number of EIB operations in Latin America – report available here.