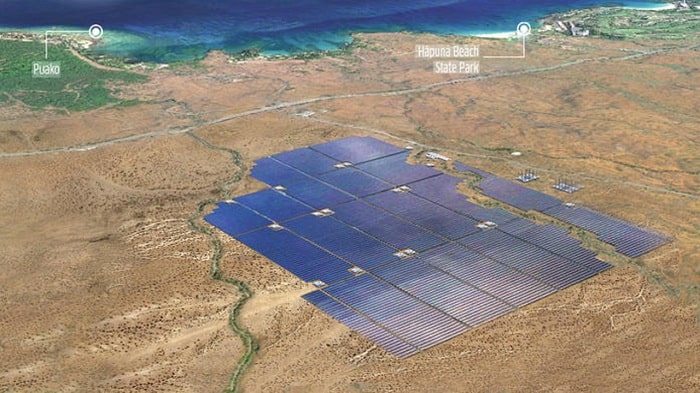 A pair of solar-plus-storage projects that will generate 120 megawatts of solar power with 480 megawatt-hour storage capacity in South Kohala are moving forward.

Hawaiian Electric Co. on June 2 announced it had selected the two projects in addition to 14 other solar-plus-storage or standalone battery storage projects across the state in the latest phase of the company’s clean energy transition for Oahu, Maui and Hawaii Island.

According to the company, the project will produce 206 gigawatt/hours annually, which is enough to power 36,000 average Hawaii Island households.

Further, it will avoid 144,000 tons of carbon emissions that would have been produced making the same amount of electricity with fossil fuels.

“It’s like taking 32,000 cars off the road,” the company said in a statement following HECO’s announcement.

The project is expected to be online in 2023, but that depends on the length of the economic disruption caused by the COVID-19 pandemic, as delays in bringing the projects online are possible, the release stated.

ENGIE next begins one-on-one contract negotiations with Hawaiian Electric to reach a 25-year power purchase agreement. All contracts must then be approved by the Public Utilities Commission.

Throughout this process, ENGIE it will continue to engage with communities near the project to discuss and address any input that they may have.

“ENGIE EPS has a longstanding track record in deploying hybrid battery storage systems on islands around the globe, and ENGIE has over a decade of experience working in Hawaii,” said CEO Carlalberto Guglielminotti. “We look forward to utilizing this expertise to help the Islands meet its target of 100% clean energy and to continuing our engagement with the Hawaii Island communities as we do so.”

The exact location of the project will be determined upon completion of additional surveys and studies, according to the company.

EDF Renewables said it chose Waikoloa area based on criteria including the proximity to the Waikoloa Substation and connecting powerlines that have excess capacity for additional power.

The company will hold a community meeting at 5:30 p.m. July 13 to provide more information about the project, as well as to introduce team members and engage in discussion. This will be a virtual meeting and login information will be posted closer to the event.

EDF said it encourages comments and questions to be submitted outside the meeting, which will mark the start of a required 30-day public comment period. All comments and feedback relating to the project will be documented verbatim and submitted to the Public Utility Commission for review for project approval.

The project is also in the pre-construction phase, which includes continued community engagement, surveys and studies and negotiations with HECO on the power purchase agreement and permitting. Any contract must then be approved by the Public Utilities Commission.

In addition to the South Kohala projects, HECO was selected to build a 12 MW/12 MWh contingency battery storage system at the Keahole substation in North Kona.

The storage system allows energy to be sent to the grid as a quick response to an unexpected event such as a sudden drop in energy production from wind, solar, or a thermal power plant. This quick response capability improves grid reliability and reduces the likelihood of customer outages, according to HECO.

HECO said through a press release that Hawaii residents, businesses and organizations are leading the charge to mitigate negative impacts and design solutions. Hawaii led the nation in 2015 by signing into law a Renewable Portfolio Standard of 100% renewable energy generation by 2045.