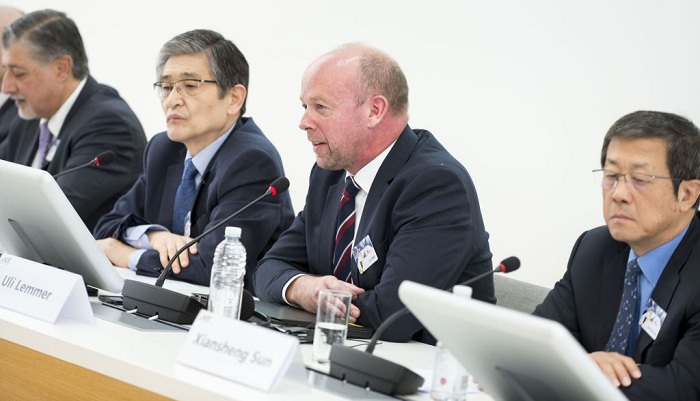 The fourth industrial revolution or as it is also called “Industry 4.0” is an era of innovation characterized by the transition to automated digital production, managed by intelligent systems in real time. The new type of industrial production is based on such technologies as big data, automation, blockchain, Internet of things, artificial intelligence, smart grids.

It is obvious that the coming industrial reality will have a significant impact on all spheres of life. Experts of the VIII Global Energy Prize Summit`s round table devoted to the fourth industrial revolution, considered the impact of “Industry 4.0” on the energy sector, assessed the benefits of technological innovations and possible risks.

The fourth industrial revolution is different in scale and complexity of the implemented changes from all previous ones, all participants agreed with this thesis. The new era will be a time of great opportunities as well as serious threats. Among the benefits of digitalization of energy systems, experts called the increase in the reliability of energy supply and quality of energy services to ensure the increased requirements of consumers, optimization of information flows, increasing the efficiency of decision-making, productivity and quality of personnel.

Among the main challenges and threats of the new industrial paradigm are the problems of cybersecurity and the need to take measures to counter cyberattacks, the problems of ensuring the controllability, stability and survivability of energy systems, the properties of which are radically changing under the influence of innovative energy technologies, the need to modernize educational programs to teach future workers to manage technologies, as well as ensuring social transformations, political reforms and the legal framework.

Despite the possible risks, many countries are introducing new technologies as a platform for future energy systems. In particular, in the chain of production, transportation, distribution, storage and consumption of energy. There are technologies that allow you to control energy processes from beginning to end. For example, according to Sauro Pasini, the Global Energy Prize expert, President of the International Flame Research Foundation, artificial intelligence and big data help predict the operation of the service networks, and to reduce downtime. In addition, continuous real-time data flows make it possible to create a digital version of any product or process, allowing manufacturers to predict results more accurately, identify problems more quickly and create quality products.

Artificial intelligence makes an independent decision about what action to take upon detection of a failure. According to Sauro Pasini, the connection of the virtual and physical world will solve the problems before they arise. The expert gave an example of the technology of modeling the “digital twin” power plant with the parameters and data of the real installation. This simulation makes it possible to eliminate possible errors and track key performance indicators. He also noted that the fourth industrial revolution is not enough to consider only from a technological point of view.

The formation of a new working class 4.0 with the skills and personal qualities necessary to work in an intelligent factory will be crucial. Only in this way it will be possible to properly implement the new realities of the industrial revolution and make technological advances available to companies and the entire civilization. It is also important to address the political norms and legal constraints of the new reality. Who will be responsible for the errors of the machine running on artificial intelligence?

The idea of the decisive role of political support for the new industrial revolution was supported by Dominique Fache, Member of the Global Energy Prize International Award Committee, Member of the Board of Directors of Technopark Sofia-Antipolis, Chairman of the RTF Board of Directors. In his view, technological change would be feasible only if it was backed up by political will. The expert also predicted that in the next 5-10 years there will be revolutionary changes in the energy sector. Energy storage technologies, solar energy and electric vehicles are the areas that will ensure these global transformations.

Assessing the current technologies that already have a great impact on the world of energy, and at least in the future until 2040 will retain their positions, the summit participants noted low-tonnage LNG, hydraulic fracturing, underwater mining complexes and solar panels. It should be noted that these technologies were previously identified by experts of the Global Energy Association in the framework of analytical work to identify advanced foreign technical solutions that are promising and can be localized in different regions of the world.

Presenting the results of the analytical work, Stanislav Roginskii, the Global Energy Prize expert, associate professor National Research UniversityHigher School of Economics, noted that low-tonnage LNG can reduce the usage of petroleum products in various sectors of consumption. Hydraulic fracturing is the main tool for the development of unconventional oil and gas reserves. In turn, underwater mining complexes have opened up the possibility of extracting oil from deep-sea and ultra-deep-water fields, and solar panels have started a new “energy revolution” together with other RES and form the structure of the global energy balance.

Summing up the discussion, the participants of the round table concluded that the fourth industrial revolution will bring fundamental changes in production processes. It entails not only technological innovations, but also a change in the social paradigm and cultural code. Large-scale implementation of cyber-physical systems and digitalization of industry will not be possible without legal reforms and political reforms. In general, the development of “Industry 4.0” is associated with uncertainty and misunderstanding at the moment of further transformations. Only one thing is clear – the fourth industrial revolution will have a fundamental impact on all spheres of human life, which will be so multifaceted that it will be almost impossible to separate one specific effect from another.