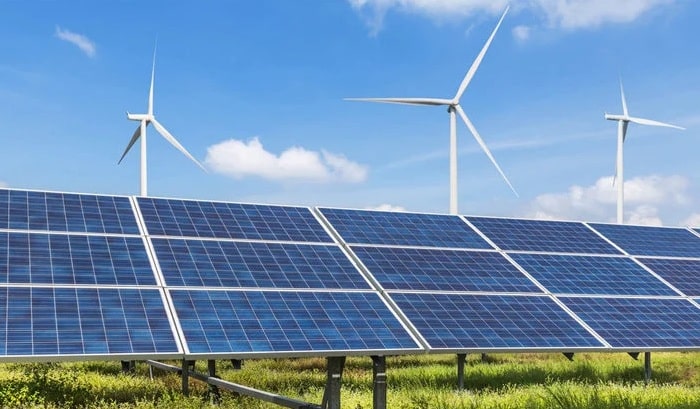 According to a review by the SUN DAY Campaign of data just released by the Federal Energy Regulatory Commission (FERC) and the U.S. Energy Information Administration (EIA) solar and wind have made a strong start in 2021 .

The latest issue of EIA’s “Electric Power Monthly” (with data through January 31, 2021) reveals that utility-scale solar thermal and photovoltaic (PV) plants produced 23.1% more electricity in January 2021 than they did a year earlier while estimated small-scale solar (e.g., rooftop PV systems) increased by 18.8%. Combined, and notwithstanding the Covid pandemic, solar grew 21.7% and provided 2.4% of the nation’s electrical output.

Wind also showed strong growth, increasing by 6.6% in January 2021, compared to the first month of 2020, and provided 8.6% of U.S. electrical output. Together, wind and solar increased by 9.5% and accounted for a bit more than 11.0% of net generation in January.

Along with other “green” energy sources (i.e., biomass, geothermal, hydropower), renewables grew by 6.3% and accounted for more than a fifth (20.2%) of U.S. electrical production in January 2021compared to 19.6% the year before.

Renewable energy sources collectively now account for 24.30% of the nation’s total available installed generating capacity [1] and continue to expand their lead over coal (19.43%) and nuclear power (8.50%). The generating capacity of just wind (9.93%) is nearly a tenth of the nation’s total while wind and solar combined account for 14.46% … and that does not include distributed (e.g., rooftop) solar. [2]

In fact, FERC data suggest that renewables’ share of generating capacity is on track to increase significantly over the next three years (i.e., by January 2024). “High probability” generation capacity additions for wind, minus anticipated retirements, reflect a projected net increase of 22,338-MW while solar is foreseen growing by substantially more – 37,928-MW. By comparison, net growth for natural gas will be only 15,175-MW. Thus, wind and solar combined are forecast to provide nearly four times (3.97%) as much new generating capacity as natural gas over the next three years. Hydropower is also projected to experience growth (931-MW), while biomass and geothermal may dip by 219-MW and 2-MW respectively.

On the other hand, the generating capacities of coal and oil are projected to plummet – by 25,380-MW and 4,009-MW respectively. In fact, FERC reports no new coal capacity in the pipeline over the next three years and just 6-MW of new oil-based capacity. Nuclear power is likewise forecast to drop sharply – by 4,330-MW, or more than 4% of its currently operating capacity.

In total, the mix of all renewables will add more than 60,976-MW of net new generating capacity to the nation’s total by January 2024 while the net new capacity from natural gas, coal, oil, and nuclear power combined will actually drop by 18,544-MW .

In fact, renewables’ share could – and probably will – be even higher. For almost two years, FERC has been regularly increasing its renewable energy projections in the monthly “Infrastructure” reports. FERC’s first such projection – provided in its March 2019 report – forecast the addition of 36,608-MW of wind and solar during the ensuing three years. In its most recent report, those forecasts had grown to 60,976-MW of new solar and wind capacity by January 2024.

“The strong growth by solar and wind during the past decade shows no sign of abating with the start of a new year,” noted Ken Bossong, Executive Director of the SUN DAY Campaign. “They, coupled with other renewable energy sources, appear to be on track to providing a quarter of the nation’s electrical generation and possibly a third of its generating capacity within the next five years.”