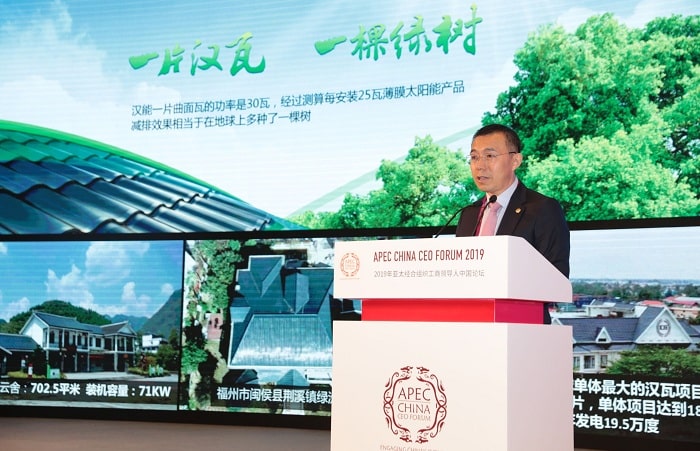 China will lead the third industrial revolution thanks to the fusion of its pioneering mobile energy and 5G technologies, said Yuan Yabin, Chairman of the Board at Hanergy Mobile Energy Holding Group, a world leading clean energy company headquartered in China. Yuan made the views at the APEC China CEO Forum 2019 that was recently held from July 21-22 in Hangzhou, China.

Commissioned with the theme, “New Industry, New Prosperity” this year’s APEC China CEO Forum focused on the opportunities that a new wave of scientific and industrial revolution brings, strengthening the coordination among sectors, as well as ameliorating the quality of economic development.

In his keynote speech titled, “Mobile Energy Makes Life Better”, Mr. Yuan emphasized that China has been a global leader in the clean energy, especially the mobile energy sector.

He averred, “Green-powered buildings and diverse application of mobile energy has changed the way energy is produced and used. With the revolution of mobile energy sector combined with significant advancement in 5G technology, China is well on its way to lead the Third Industrial Revolution contributing to the development of world civilization.”

Highlighting Hanergy’s immense contribution to the mobile energy sector, Yuan said, “We’re proud to have created a mobile energy industry thereby, altering the perception of the photovoltaic industry through the introduction of varied products and applications. Today, mobile energy has fundamentally and systematically revolutionized the dynamics of energy production. The constant breakthroughs in the sector have been instrumental in sensitizing the households and the corporates across industries to take to renewable energy.” 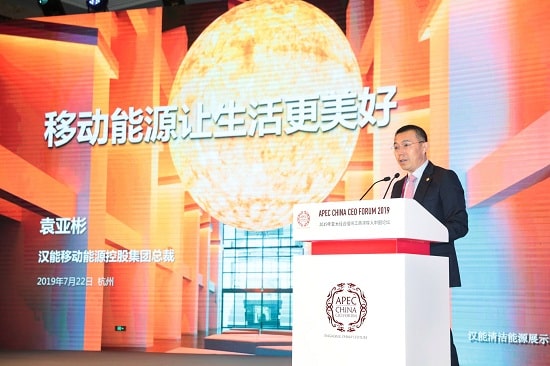 Further laying emphasis on universal application of thin-film power technology, Yuan said, “The technology can be brought to effective use across industries such as aerospace, transportation, and consumer electronics. Energy is ubiquitous, and Hanergy has capabilities par excellence to power everything.”

Hanergy has been focused on the development of clean energy sector over the past thirty years since the company’s establishment, creating two “eight-year” legends in the history of China’s business landscape. In the first eight years, Hanergy is credited for breaking central government-owned enterprises’ monopoly on hydropower station and built a world-leading hydropower station that’s privately operated. Even today Jin’anqiao Hydropower Station is still the world’s largest private owned station in its kind. In the second eight years, Hanergy followed its strategic vision for the thin-film power industry and marched ahead on the path of independent innovation through acquisition of global technologies, and constant breakthroughs in technology, to create the whole new mobile energy industry.

Hanergy’s innovation-driven strategy allows China to own the world-leading technology of thin-film power. Mr. Yuan apprised that Hanergy’s painstaking efforts to lead the innovations in thin-film power and mobile energy industry have given China an edge in the development of new energy. Today, undoubtedly at the sector of new energies China has been world’s number one in terms of technology, investment, installation and emission reduction, contributing significantly to the global development of alternative energy and energy security.

Subsequently, in the telecommunications industry, China’s Huawei has been a global pioneer in 5G technology. The application of 5G technology has made it possible for all things to be connected, better than before. Mr. Yuan said, thin-film power can even provide reliable and safe energy solution for 5G technology whether it’s used in IoT, Industry 4.0 and Internet of Intelligences. “At Hanergy, we’re well equipped to power everything through mobile energy applications independently developed by the company.”

Besides, major issues discussed at the CEO forum including the digital economy, evolution of the manufacturing industry and fintech, as well as industrial cooperation under the Belt and Road Initiative, the forum laid greater emphasis on sustainable development.

The APEC China CEO Forum is a global economic dialogue platform under the framework of APEC and initiated by China Council for the Promotion of International Trade (CCPIT), China Chamber of International Commerce (CCOIC), and APEC China Business Council. It is a high-end international platform to drive interaction, innovation and win-win cooperation for business community.

About Hanergy Mobile Energy Holding Group Limited:
Hanergy Mobile Energy Holding Group Limited is a multinational clean energy company as well as the world’s leading thin-film solar power company, committed to change the world by thin-film solar. It has branches in provinces all over China as well as in the Americas, Europe and the Middle East, Asia-Pacific, Africa and other regions. Through global technical integration and independent innovation, Hanergy has become a world leader in thin-film solar technology. The maximum research conversion efficiency of its copper indium gallium selenide (CIGS) technology has reached 21.2%, as certified by Germany’s Fraunhofer Institute for Solar Energy Systems (ISE), and its single-junction and dual-junction gallium arsenide (GaAs) technology’s research conversion efficiency has reached to 29.1 and 31.6% respectively. Having been at the forefront of technological innovations, and with its record conversion efficiency rates for solar thin film cells, Hanergy has retained its leadership position in thin-film power industry.