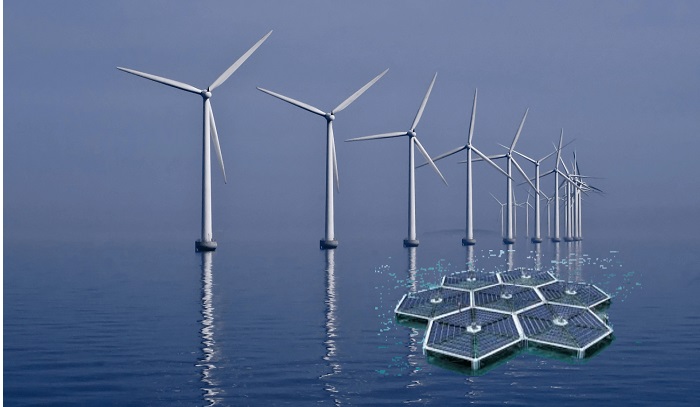 After building an offshore floating PV plant combined with a wind turbine, Chinese development behemoth SPIC and a Norwegian solar leader are claiming a world first. They now hope it can withstand a confrontational typhoon season in China.

The hybrid plant off the coast of Shandong province makes use of floating PV panels created by Ocean Sun in Norway that are connected to an offshore wind turbine by SPIC and share its power export line.

According to Ocean Sun, which is collaborating with partners worldwide to commercialise its patented flotation ring polymer membrane technology, the twin 0.5 MW floating arrays will serve as a pilot for a proposed 20 MW project in 2023. The company asserted that the connection with wind energy would lower energy costs by increasing output and that a huge market would develop for hybrid offshore installations. Major players like RWE have already made public plans for their own North Sea projects.

While the use of floating PV on inland surfaces like lakes and reservoirs is already very popular, installing solar at sea has a different set of difficulties due to the extreme environmental conditions encountered there.

The CEO of Ocean Sun, Bjorge Bjrneklett, stated earlier this year that all parties involved are aware of the hazards because the waters around Shandong experience annual typhoons with problematic sea state. In all cases, Ocean Sun will make improvements to the product based on what they learn from the exposed site.

Last year, Bjrneklett asserted that ocean-based PV has the potential to surpass floating wind in terms of growth. If one looks at irradiation maps of the world, especially in Southeast Asia, the applicability area than for floating wind is significantly larger.

The CEO of Ocean Sun also stated that onshore solar is a target for the technology. People would likely wonder why they installed solar panels on land in the first place, he said in an attempt to sound slightly futuristic.