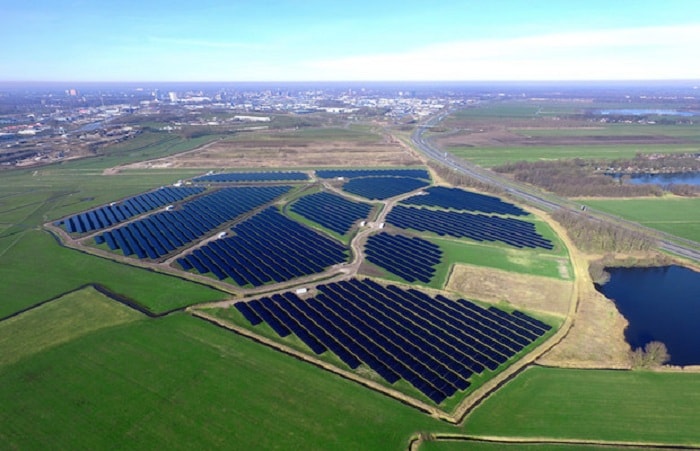 The event to mark the inauguration of the country’s largest solar park took place in the presence of government officials and the senior management of Hanergy Thin Film Power Europe, a subsidiary of Hanergy Thin Film Power Group, and Solibro, Hi-Tech GmbH subsidiary. Mr. Philip Broeksma, Alderman of renewable energy at Groningen municipality, Mr. Zhang Guosheng, Economic and Trade Councillor of the Chinese Embassy jointly opened Roodehaan solar park located in Groningen, Netherlands.
The Roodehaan project is a ground mounted solar park covering 22 hectares and installed capacity of 11.4 Megawatts. The solar park consists of 81,000 solar modules and is one of the largest solar parks constructed with thin film modules in the Netherlands to date. The solar park will annually produce the electricity equivalent for 3,500 households in the Netherlands.

Next to co-developer of the project, Hanergy Europe is also the exclusive supplier of the 81,000 thin film modules that have been manufactured by Solibro. Hanergy Europe has been active in the Dutch solar market since 2011 and Roodehaan project has been its largest development in the Netherlands so far.

For Groningen municipality, this is the largest solar park within its municipality. “This solar park is a major milestone in realising our municipality’s ambition to become energy neutral by the year 2035,” said Mr. Broeksma.

Commenting on the launch, Mr. Ming Li, CEO of Hanergy Thin Film Power Europe said, “The Roodehaan solar park is a landmark project that resembles the success of Hanergy’s solar development strategy in the Netherlands. Hanergy takes great pride in having co-developed and supplied its Solibro modules to this project in close cooperation with its Dutch project partners.”

According to Mr. Zhang Guosheng, Economic and Trade Councillor of the Chinese Embassy, “Roddehaan solar project illustrates the key role that China and Chinese companies play in the renewable energy transition in the Netherlands and the rest of Europe.”

The recent move is the testimony of Hanergy’s commitment towards the Netherlands’ solar market. Hanergy has accorded priority to the Netherlands as one of the key strategic markets for their business globally.

In the Netherlands, Hanergy’s thin-film solar technology and products have been used in varied projects, for instance in AFAS stadium, the home stadium of Dutch Eredivisie (top league) football club AZ, 1,725 thin-film modules produced by Hanergy’s subsidiary MiaSolé have been installed on the roof, which helps the football club engage the sustainability.

Hanergy’s solar cells set the world record for conversion efficiency several times, with the newest one being 29.1%. It launched and upgraded handful of consumer products in 2018, including Humbrella, solar-powered umbrella; SolarTank, solar backpack; HanPower, solar power bank, retaining its leading position in mobile energy sector. Subsequently, with the debut of HanTile in April 2018 and HanWall in September 2018, Hanergy upped-the-ante in global building-integrated PV segment.

Constant breakthroughs in the sector have led to steady surge in Hanergy’s market value. Further, Hanergy’s “mobile energy +” model is well in place to promote in-depth integrations of mobile energy and traditional industries.