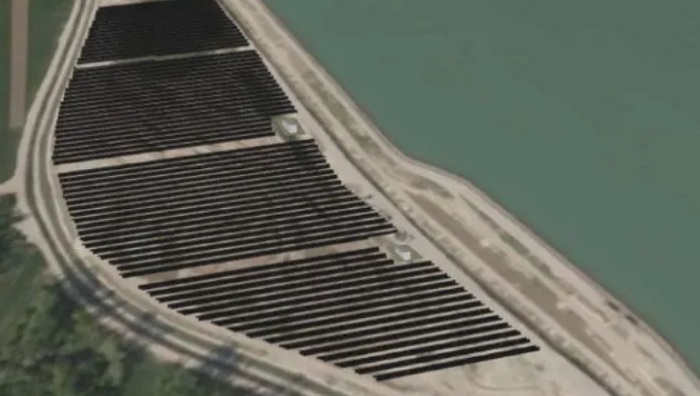 HESS plans to add a 6 MW photovoltaic unit to its Brežice hydroelectric plant, located on the lower part of the Sava river in Slovenia, which would make it a hybrid power production system. The solar unit would be the biggest of its kind in the country at the moment.

After installing a rooftop photovoltaic unit on its office building in March, Hidroelektrarne na spodnji Savi (HESS) went on with exploring diversification options. The hydropower plant operator said it would build the largest solar power plant in Slovenia alongside the reservoir of its Brežice hydropower plant.

The facility with an estimated cost of EUR 4.3 million is planned for a capacity of 6 MW. It will effectively be the fourth unit of the hydroelectric plant, located three kilometers upstream on the right bank of the Sava river, as they will be linked by cable.
Facility can be relocated if necessary

The solar system will be installed next to the embankment, at the river sediment disposal landfill. It will take up six hectares and the remaining three hectares will continue to be used for the same purpose.

HESS said the modules in the planned photovoltaic plant near the Slovenia-Croatia border can be easily relocated in case the landfill needs to be expanded. The company is controlled by state-owned groups GEN and HSE.

The idea dates back to 2004, it said. The Municipality of Brežice is preparing a detailed spatial plan which should allow HESS to build a solar power unit of up to 10 MW, the announcement adds.
HESS to connect photovoltaic unit to 110 kV transmission

The utility said it would be the first photovoltaic plant in the country to be connected directly to the transmission grid, as other such units supply electricity to the 20 kV distribution network. According to HESS, the solution avoids burdening the distribution network and increases the stability of the 110 kV system.

The project will upgrade the Brežice hydropower plant into a hybrid system. The company said it would enable it to use more water from the reservoir at night, when the solar power plant is idle.

EU’s Cohesion Fund could cover one fifth of project

HESS revealed the ambition to obtain funds from the European Union’s Cohesion Fund, which covers up to 20% of investments. The photovoltaic unit is scheduled to come online in the first half of 2022.

The run-of-river hydropower plant with a dam was commissioned in 2017. Its capacity is 47.4 MW. The firm is preparing to build the 28 MW Mokrice system, the last one in the row on the lower Sava, where HESS has four hydropower plants. Their combined capacity is 158.1 MW.