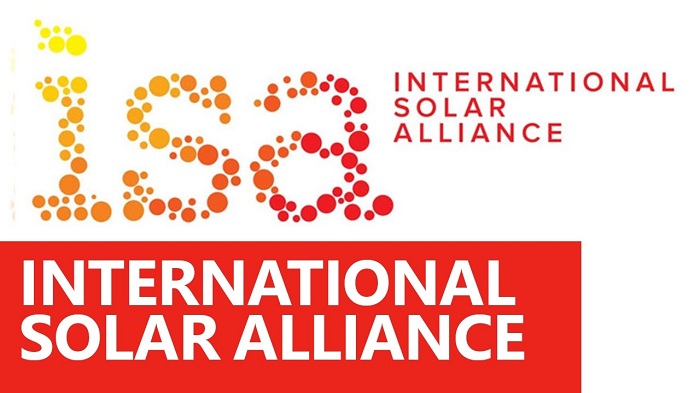 Launched in November 2015, the alliance aims to collectively address key challenges to the scaling up of solar energy in member countries that fall between Tropic of Cancer and Tropic of Capricorn. The Alliance is now supported by 68 member countries, and a further 20 countries are in the process of becoming members.

India and France were re-elected as the President and Co-President of the International Solar Alliance (ISA) for a term of two years at the virtual meeting of the Third Assembly held yesterday.

Four new vice-presidents were also chosen to represent the four regions of ISA: representatives of Fiji and Nauru for Asia Pacific Region; Mauritius and Niger for Africa Region; UK and the Netherlands for Europe and others Region, and Cuba and Guyana for Latin America and Caribbean Region.

The ISA was launched by Indian Prime Minister Narendra Modi and French president Emmanuel Macron on November 30, 2015 in Paris, France, on the sidelines of the Paris Climate Change Conference. The inter-governmental body aims to scale up the use of solar energy in ISA member countries by making efforts to reduce finance and technology costs, mobilize investments needed for massive deployment of solar energy, and pave the way for future technologies adapted to the needs.

The Alliance is now supported by 68 member countries, and a further 20 countries are in the process of onboarding.

The ISA has initiated various activities and programs since its second Assembly held last year.

R.K. Singh, the President of the ISA assembly, and India’s Power and New and Renewable Energy Minister, informed, “Six programs and two projects are now underway covering various aspects of solar energy. A robust pipeline of more than US$ 5 billion has been developed for solar energy applications to meet the lighting, irrigation, drinking water and productive energy requirement of the ISA member countries, which have so far been largely deprived of modern energy services.”

“Recently, ISA has initiated programs for segregation of demand for 47 million home power systems, which will not only meet subsistence energy needs of the rural households but will also contribute to improving health services and availability of potable water.”

Barbara Pompili, co-president of the Assembly, and French Minister for Ecological Transition, underlined that ISA played an essential role in helping redirect funding towards renewable energies, particularly in developing countries, and taking up the challenge of energy at the service of all.

Pompili pointed out that of the 1.5 billion euros of financing France committed for solar projects in ISA member states until 2022, 1.15 billion euros has been committed to concrete projects.

“France has also supported the collaboration with the World Bank to mobilize financing. The Sustainable Renewables Risk Mitigation Initiative (SRMI) should help mobilize 18 billion euros in private investment to finance more than 10 GW of solar projects, and a first project is being launched in Mozambique with the support of France and the European Union,” she said.