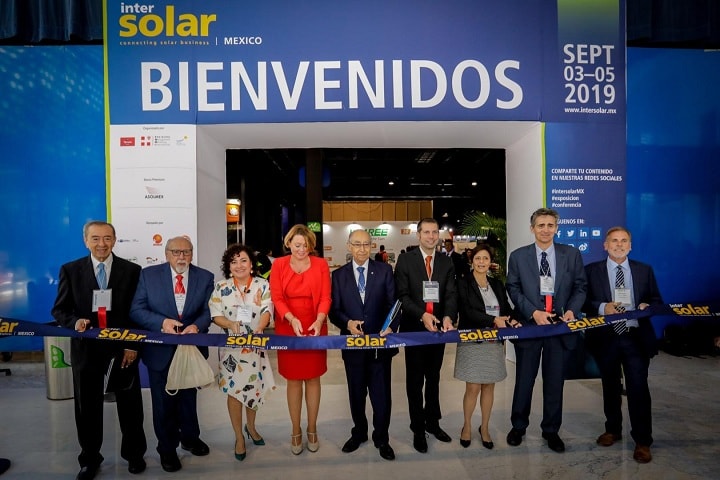 Intersolar Mexico offered a series of workshops focused on the high potential of the photovoltaic and solar thermal industry in the country. Due to the great growth in recent years, investors, industry and government representatives gathered at this event to discuss issues of international relevance such as PV system design and installation best practices, photovoltaic and solar thermal market developments and opportunities of digitalization in solar in Mexico.

In the full-day workshop Solar Heat: An Investment in Sustainable, Efficient and Profitable Energy, Dr. Jose Alberto Valdes Palacios, General Director of Development and Energy Sustainability of the Secretaria de Desarrollo Económico of Mexico City, said that the importance of these events resides in the possibility of promoting the benefits and strategies which are being implemented in terms of the use of renewable energy.

He presented the Solar City project to the attendees as well as the environmental and climate change program for Mexico City, which covers the period 2019-2024 and aims at training and certifying 1,000 technicians installing photovoltaic generation systems and solar heating water under competition standards. “Ciudad Solar is a very important program that should be made public. The combination of Intersolar Mexico with The Green Expo® is an ideal venue to show the work going on in terms of policies for the business sector and for the public” commented Dr. Valdés.

In the participation of ANES, Angélica Quiñones, President of the association, focussed in her presentation on “Solar thermal energy: opportunity for energy security and cost reduction of Mexican industry” where she indicated that 70% of the consumption of the industrial sector is heat and the other 30% electricity. That’s why new strategies for positioning this market are already being considered.

FAMERAC, represented by its president, Daniel García, spoke of energy savings in the solar water heating services sector, where he said that energy consumption in homes, businesses and factories goes beyond electricity. The heating of water and other fluids requires thermal energy that is traditionally generated by fossil fuels, whose price and environmental impact represent a high risk. Solar thermal energy, or solar heat, is the renewable and reliable solution. There is a vast experience with solar water heating technologies in Mexico, one of the most dynamic and fastest growing markets worldwide.

During the workshop Digitalisation and Solar in Mexico, the Asociación Mexicana de Energía Solar, (ASOLMEX), presented through Enrique San Juan, Director of Professional Social Media Seminars, together with the SolarPower Europe (SPE) released and presented the report “Digitalization and solar energy in Mexico”, which includes a series of commitments that the SPE and ASOLMEX adopt for the digitalization of the solar industry. “These commitments demonstrate the motivation of the sector to reduce energy poverty in the country, as well as promote the development of quality content to give certainty about the participants and markets of the Mexican electricity sector” he said.

In addition, he informed that a series of regulatory requests have been made for the consolidation of existing digital photovoltaic businesses and to promote the development of new business models. These requests highlight the importance of cooperation between the different public and private entities that make up the electricity sector, for the growth of the photovoltaic market and thus help Mexico to become the seventh world power in solar energy.

This is how the first edition of Intersolar Mexico began, a forum that brought together the solar industry with the most innovative projects, programs and companies. Intersolar Mexico is presented simultaneously with THE GREEN EXPO® and Aquatech Mexico, at the World Trade Center, Mexico City.