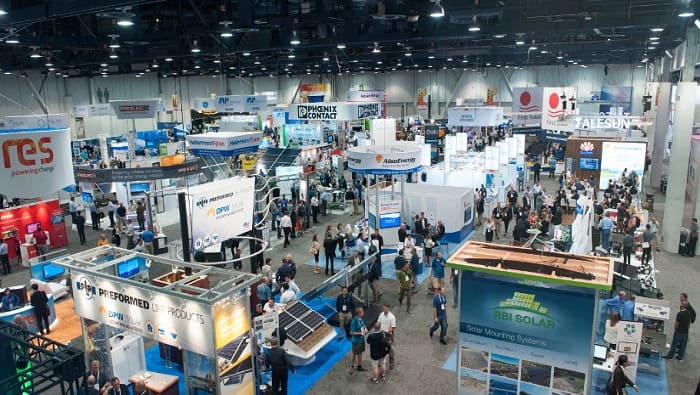 Solar Power International (SPI), one of the largest clean energy industry trade shows in the United States, has canceled its Oct. 21-22 live expo in Las Vegas. The event will instead be entirely virtual.

The rebooted expo will include a free virtual trade show where attendees can book appointments for meetings and “booth chats” with company representatives, according to an announcement by organizer Solar Energy Trade Shows (SETS). A series of “microconferences” – weekly series of online panels and workshops – originally scheduled to create momentum for the live event, will kick off as planned on Sept. 14.

“Although I am saddened that we will not be able to host the industry face-to-face this year, our top priority is always the health and safety of our exhibitors, attendees, staff, partners and stakeholders,” said Stephen Miner, president and CEO of SETS.

SPI – traditionally a major hub for networking, business meetings and deal-making for solar companies in the United States – is co-hosted by the Solar Energy Industries Association (SEIA) and the Smart Electric Power Alliance (SEPA). The two nonprofits established SETS in 2009 to manage the show, with the proceeds providing significant funding for both SEIA and SEPA.

The outdoor event in Las Vegas was itself a Covid-driven reboot from the originally planned North American Smart Energy Week in September in Anaheim, California. Even as other industry conferences were canceled, postponed, or went online, SETS had hoped to keep a scaled-down trade show as an in-person event with beefed-up safety measures.

However, the recent surge in Covid-19 cases across the country has prompted many states to delay reopening plans for businesses and large events. In Nevada, public gatherings, indoor or outside, are currently limited to 50 people, making the decision for SPI to go all-virtual inevitable.

Still, with increasingly sophisticated virtual meeting platforms, the industry seems to be adjusting quickly to doing conferences and business networking online. Some events have even found registration has increased. SETS currently has more than 200 exhibitors signed up for the virtual trade show, and Miner is looking on the upside.

“Going completely virtual this year opens the doors for interaction and collaboration with industry representatives who may have been unable to travel to our event in the past,” he said.