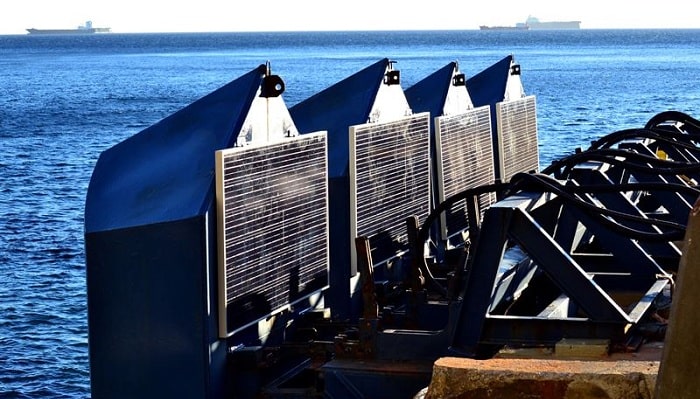 The equipment, installation and grid connection works added around 1.46% to the construction cost of the Gibraltar wave energy power plant and is expected to decrease in costs when implemented in EWP’s commercial scale installations.

The equipment, installation and grid connection works of the solar panels have been carried out by Metaelect System, from Spain.

With completion of installation, Eco Wave Power will be commencing long term testing of the newly installed equipment, with the vision of reviewing the possibility of integrating solar panels in all its future installations.

The idea for the combined solution was conceived from significant interest of several of EWP’s potential clients in having a variety of renewable energy sources as part of their energy mix. However, due to space restrictions (especially experienced by islands), there is a limitation on the implementation of large-scale solar farms which often require significant land spaces.

In order to ease the integration of the sources, without occupation of any land space (which often also comprises a significant part of the cost in commercial scale solar farms), EWP developed a method for connection of the solar panels to the surface of its’ floaters. As a result, on the same space, there would occur generation from both renewable energy sources; wave energy and solar power.

The Gibraltar project , co-funded by the European Union Regional Development Fund and the European Commission’s HORIZON2020 framework program is a significant step towards the commercialisation of the EWP technology.

Charles Collinson, Director of European Union Programmes Secretariat, HM Government of Gibraltar commented: “Eco Wave Power was one of the first projects approved under the 2014-2020 European Regional Development Fund Programme. The project was unique in both concept and achievements. It was able to create a pilot project for research and development of the most effective, unique and innovative wave power station within the jurisdiction of Gibraltar, together with all the inherent problems of space and lack of infrastructural support.

The project is truly a success story of the ERDF programme. Not only achieving its’ initial targets but setting new standards in the renewable energy field. It has minimum visual impact on the landscape; does not create any interference on the sea floor; minimum to no impact on the marine environment; produces no pollutants, waste products, noise nor gaseous emissions. It reduces shoreline and breakwater erosion and extends their life span. It has almost zero carbon footprint. It is also a prime example of the leadership of women in the complex and innovative field of wave energy technology. As a result of the above, Eco Wave Power was nominated for a Regio Start Award in 2017, under the criteria of Innovative Projects- Energy Union: Climate Action”.

Inna Braverman, CEO of Eco Wave Power said: “We are very grateful for the productive collaboration with the Government of Gibraltar, ERDF, the European Commission and Gibelectric. Without their support and assistance, the progress achieved by Eco Wave Power would not have been possible. We are pioneering a new sector and are truly making a change! I would also like to thank the Eco Wave Power team and subcontractors, which remain passionate and committed even during these hard times with the Corona virus outbreak. Even with the difficulties surrounding the outbreak, we were able to finalize wave simulation testing of our new Jaffa Port project and integrate solar panels into our operational power station in Gibraltar. I am beyond proud”.

EWP is recognized as a “Pioneering Technology” by the Israel’s Ministry of Energy and was labelled as an “Efficient Solution” by the Solar Impulse Foundation. Furthermore, EWP’s project in Gibraltar has received funding from the European Union Regional Development Fund and from the European Commission’s HORIZON2020 framework program. The company was also recently recognized by the United Nations in receiving the “Climate Action Award”, which was granted to the company during COP25 in Madrid, Spain.