Marine Current Turbines Ltd. (MCT), a Siemens business, and Bluewater Energy Services B.V. (Bluewater) have agreed to jointly develop a 2 megawatt floating tidal current turbine, called SeaGen F. This turbine will be the first of its kind to be installed in Canada’s Bay of Fundy, in cooperation with Nova Scotian project developer Minas Energy. The turbines will produce enough clean and reliable energy to supply up to 1,800 Nova Scotian households. Plans are under development to build-out a commercial multi- megawatt array at the tidal energy facilities of Fundy Ocean Research Centre for Energy (FORCE).

Siemens has gained expertise in tidal current turbines with its SeaGen S 1.2MW turbine installed in Northern Ireland since 2008, a monopile structure, anchored to the seabed. Bluewater contributes know-how in the field of floating platforms and subsea moorings. The project site is leased from FORCE by Minas Energy and is located in the Minas Passage, Bay of Fundy. A tidal range of up to 15 metres and current speeds of up to 5.5 metres per second, together with Nova Scotia’s Feed In Tariff make this one of the most attractive and economic sites in the world. Scientific studies suggest up to 2.5GW of clean and predictable tidal power may be safely harvested in the Minas Passage.

“Over recent years we have used our unique offshore skill-set and experience to develop an open-architecture floating platform for tidal turbines. We have a fully designed product ready to be validated at full-scale in open sea tidal conditions. We are delighted to test this setting in the unrivalled tidal conditions of the Bay of Fundy and beyond”, said Michel Bonte, Vice President Business Development, Bluewater Energy Services B.V.

“We at Minas Energy are confident that our partnership with Siemens Bluewater will set the stage for the emerging tidal industry in Nova Scotia. We will work with government, the public, and all other stakeholders to safely harness the abundant energy in this world-class resource”, said John Woods, Vice President of Energy Development at Minas Energy.

The worldwide potential for power generated by tidal power plants is estimated at 800 terawatt-hours (TWh) annually. That is equivalent to 3-4 percent of global power consumption. Coastal regions with strong tidal currents like those in the UK, Canada, France and East Asia offer major potential for the utilization of this technology. 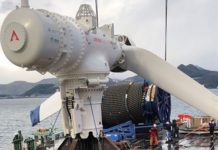 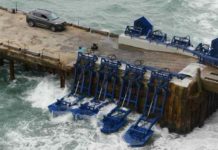 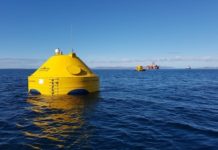