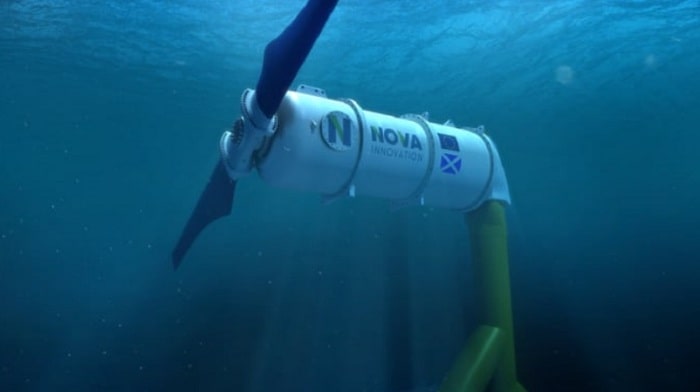 A Scottish firm has applied to develop a 1.5 megawatt (MW) tidal energy array in Canada’s Bay of Fundy area. In plans announced Tuesday, Nova Innovation said the scheme would use a series of its 100-kilowatt turbines. The turbines, which use a two-bladed rotor and sit on the seabed, have been deployed in Scotland for more than three years.

The company’s CEO Simon Forrest said that, if approved, the project would “help place Nova Scotia at the forefront of the industry, positioning the province as a global leader and center of excellence in tidal energy.” A 30 day consultation on the plans is now underway. If the project gets the go-ahead, the array will be installed in several phases, starting in 2020.

The news comes after two separate firms said they would work together on a project that will send as much as 9 MW of tidal energy to Nova Scotia’s grid.

On Monday, Sustainable Marine Energy said its collaboration with Minas Tidal LP would be known as the Pempa’q In-stream Tidal Energy Project.

The scheme will involve the co-development of the companies’ adjacent berths at the Fundy Ocean Research Center for Energy. It will make use of Sustainable Marine Energy’s PLAT-I floating in-stream tidal energy technology and be delivered in phases starting in 2020.

The first phase will involve the delivery of three of Sustainable Marine Energy’s PLAT-I platforms, which will provide a combined capacity of 1.26 MW.

Tidal power has been around for decades – EDF’s 240 MW La Rance Tidal Power Plant in France was built as far back as 1966 – but the last few years have seen a number of new projects take shape.

In September 2019, SIMEC Atlantis Energy announced that MeyGen, a tidal stream array, had exported more than 21 gigawatt hours of electricity to the national grid. MeyGen is located in waters off the north coast of Scotland.

In August, the Scottish government awarded a firm called Orbital Marine Power £3.4 million ($4.16 million) in funding to assist with the construction of a next-generation floating tidal turbine.

The Orbital O2 will be made up of a 72-meter-long “floating superstructure” supporting two 1 megawatt (MW) turbines on each side and will have rotor diameters of 20 meters. It’s scheduled to commence operations in 2020 and will be able to power over 1,700 homes annually.