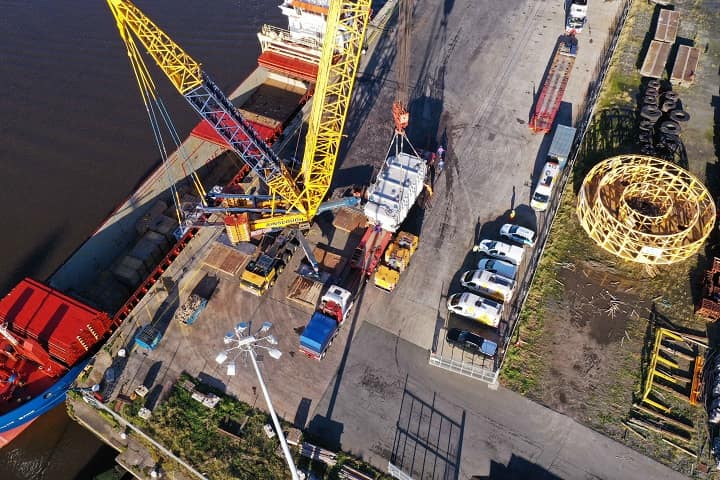 As with the first stage of the project, Collett were appointed to provide a door-to-door service for both super grid transformers. Once again working with ttheir trusted partners, Collett transported the laods from the client’s factory to port ahead of their journey to the UK Shipping in to the Port of Sunderland, the two transformers were discharged from the vessel using a 550t strut crane and landed onto their 14-row flat top trailer with all works under Collett scope of responsibility.

Collett’s Projects Department chartered a Terra Marique ro/ro barge for the second stage of the transport project. Utilising the vessel’s hydraulic roadway, each of the loaded trailers were safely driven onto the vessel by the Collett Team and secured for the onward 20-hour voyage to the jetty at EDF UK’s Torness Power Station in East Lothain.

On arrival, Collett were once again on hand to undertake the transport operations.
Having rolled the two transformers from the vessel on day 1 of this stage of the operation, both units were transported out of the power station on consecutive days for the five-mile trip to the onshore substation site. Travelling under Collett private escort and with road closures in place on the A1 between 6am – 6:30am, Collett travelled the short distance North to the Innerwick junction. Here, with the permission of East Lothian Council and under a traffic management plan, both transformers were transported with rolling road closures on the minor roads to facilitate safe passage to site.

The trailers departed Torness and transited the A1 under the pull of a single 8×4 tractor unit. On reaching the Innerwick junction, Collett added a second tractor unit at the rear providing additional traction, travelling in a push/pull formation. This formation was then strengthened on final approach with a third tractor unit, effectively double-heading the combination along the two and a half mile internal challenging track to the construction site.

Delivering over two consecutive days, and with adverse weather conditions having an impact on the accessibility of the site roads, for the second of the transformers, the Collett Team employed a fourth tractor unit to complete delivery.

With one unit pushing the loaded 14 row flat bed and three to pull, provided the required traction to deliver the final 180 Tonne super grid transformer to the desired location.

Having delivered the super grid transformers to the substation site, both were offloaded and installed onto their respective bunds by Collett Heavy Lift, utilising specialist hydraulic jacking and skidding equipment and completing stage two of the project.

The Neart na Gaoithe Offshore Wind Farm, jointly owned by EDF Renewables and ESB, will feature up to 64 turbines and with a planned capacity of 450MW, will be capable of powering up to 391,000 homes.

About Collett & Sons Ltd:
Experts in Motion since 1928 Collett have a wealth of experience transporting difficult and abnormal loads throughout the UK, Europe and worldwide. Their specialist fleet operates across depots in Halifax, Goole, the Port of Grangemouth, and most recently Collett (Ireland) Ltd in Dublin. Experts in the transport of abnormal loads, Collett are your global professional partner for transport, heavy lift, marine &amp; transport consulting.