ACCIONA Energía, through a consortium in which it holds a majority stake, has put its first wind farm – Gouda – into commercial operation with a capacity of 138 megawatts (135.2 MW net). This means that the company now has two renewables facilities in operation in the country, following the start-up of the 94.3 MWp (nominal capacity 74 MW) Sishen photovoltaic plant in 2014.

Gouda wind farm will produce an average of 423 gigawatt-hours (GWh) a year to cover the demand for electricity from around 200,000 South African households, avoiding the emission of 406 million metric tons of CO2 to the atmosphere from coal-fired power plants (equivalent to the cleaning effect of 20 million trees).

The Gouda wind farm is located in the municipality of Drakenstein (Western Cape) around 100 kilometers north-west of Cape Town. It consists of forty-six 3MW AW100/3000 turbines of ACCIONA Windpower technology mounted on 100-meter-high concrete towers.

“The start-up of the Gouda wind farm visualizes our commitment to the development of renewable energies in South Africa, to which we wish to contribute through latest-generation wind and photovoltaic plants and efficient, competitive wind turbines of our 3 MW platform”, ACCIONA Energía CEO Rafael Mateo stated recently.

The consortium that owns the wind farm is led by ACCIONA Energía (51% of the capital) and the South African infrastructure firm Aveng (29%). Other partners are Soul City Broad-Based Empowerment Company (SCBBEC) and a community development entity (Local Community Trust), both with a 10% stake.

The project for the Gouda wind farm was approved by the Department of Energy in the second round of the Renewable Energy Independent Power Producer Procurement Program (REIPPPP), set up to increase the role of renewable energies in the national energy mix.

The project for the photovoltaic plant at Sishen (Northern Cape) was approved in the same round. With a capacity of 94.3 MWp (74 MW nominal), it is owned by the same consortium led by ACCIONA and entered service in November last year. 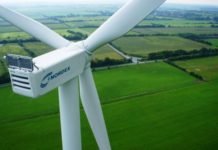 Nordex receives order for 33 MW wind power from the Netherlands

Wind energy is essential for the recovery of the Mexican economy