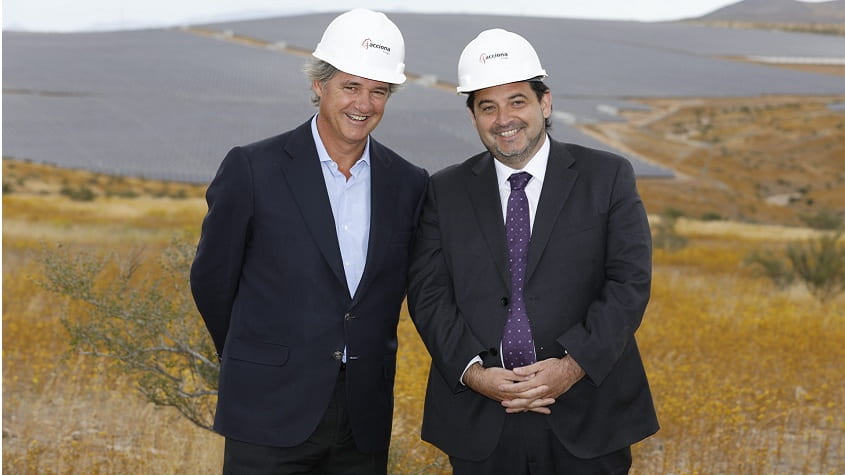 ACCIONA Energía will easily double its renewable energy capacity in Latin America to over 2,000 megawatts (MW) by 2020, all owned and operated by the company.

This was highlighted in the opening ceremony for the El Romero Solar photovoltaic plant in the Atacama Desert (Chile), a 246 MWp capacity facility – the biggest in Latin America – that symbolizes the company’s strategic commitment to one of the areas of the planet with the best growth prospects for clean energies.

The event, which was held last Friday, was attended by Chilean Energy Minister Andrés Rebolledo and ACCIONA President José Manuel Entrecanales, as well as many other personalities from the country’s institutional, business, academic and financial fields.

The company currently owns 897 MW of wind and photovoltaic power capacity in the region (in Chile, Mexico and Costa Rica). In the last trimester of this year another 700
MW will be under construction and come on stream in 2018 and 2019, plus other projects at very advanced stage of development that are expected to be completed in 2020.

“Chile meets all the conditions to be a leader in the development of renewable energy in the world and our El Romero Solar plant is a perfect example of it” said ACCIONA President José Manuel Entrecanales who added that ACCIONA hopes to continue contributing to the maturity of the industry in other Latin American countries. “What has been termed as non-conventional renewable energies today are in fact the energies that are going to become the conventional ones because they will be the ones that are imposed on all other generation technologies”, he stated.

Energy for electricity distributors and for Google
El Romero Solar was grid connected one year ago after being built in record time: 13 months. Located in Vallenar, around 645 kilometers north of Santiago, it covers 280 hectares in the Atacama Desert. Its 246 MWp (196 MW nominal capacity) can produce clean energy equivalent to the electricity demand of 240,000 Chilean homes, avoiding the emission of around 475,000 tonnes of CO2 to the atmosphere from coal-fired power stations every year.

The plant consists of 776,000 photovoltaic modules with a solar capture surface area of over 1.5 million m2 (equivalent to 211 soccer pitches). Fully owned by ACCIONA, it is connected to the Chilean Central Interconnected System (SIC) grid.

The plant has been supplying renewable-based energy to Google since January this year to cover all the multinational’s electricity consumption in Chile, in particular its data center. The contract will run until 2030.

From 1 January 2018 the plant will start supplying electricity to the distributors in the SIC under contracts arising from the 2013/03-2 tender – awarded in December 2014 – in which ACCIONA was allocated up to 600 GWh per annum over 15 years.
New wind power project in Chile

El Romero Solar is the second facility owned and operated by ACCIONA Energía in Chile after the 45 MW Punta Palmeras wind farm in the region of Coquimbo, which entered service in October 2014. As well as supplying energy to the Chilean power grid, in July this year the company signed a contract with the Falabella group, a leading retail distributor in Chile, to supply renewable energy to almost one hundred of its premises.

In the last quarter of this year ACCIONA is constructing a 183 MW wind farm (San Gabriel) in La Araucanía to cover the supply of 506 GWh awarded to the company by the Chilean Energy Commission (CNE) in August 2016.

The renewables sector in Chile offers some of the best prospects in Latin America, which also means at global level. According to the International Energy Agency (IEA), Chile can reach – including conventional hydroelectric power – a 50% share of renewable energy in its energy mix in just five years (2022) compared with 39% in 2016. This will be done with 5.2 additional GW of non-conventional renewable energies expected to come on stream in that period.

ACCIONA has been present in Chile since 1993 in other activities, initially through its Infrastructure division, in the form of major construction projects for highways, hospitals, hydroelectric plants and infrastructures for the mining sector. In the Water business, ACCIONA has designed, constructed and operates a large desalination plant for the mining industry in Copiapó, and has also built a number of wastewater treatment plants.

About us
ACCIONA Energía is a global operator in renewable energies with over 20 years’ experience in the sector and almost 9,000 MW under its ownership. It owns and operates 220 wind farms totaling 7,329 MW; 79 hydro plants (888 MW); 6 CSP plants (314 MW); photovoltaic plants totaling 389 MWp and three biomass plants (61 MW). The company develops projects for customers in wind and photovoltaic power, and markets power to large customers. www.acciona-energia.com
It belongs to the ACCIONA Group, a leader in sustainable solutions for infrastructures and renewable energy projects worldwide. Its range of services covers the entire value chain of design, construction, operation and maintenance. The company earned revenues of 5,977 million euros in 2016, has a presence in more than 40 countries and carries out its activities within a commitment to the economic and social development of the communities it operates in. ACCIONA’s aim is to lead the transition to a low-carbon economy, and does this by applying criteria of quality and innovation processes to all its projects with a view to optimizing the efficient use of resources and caring for the environment. www.acciona.com