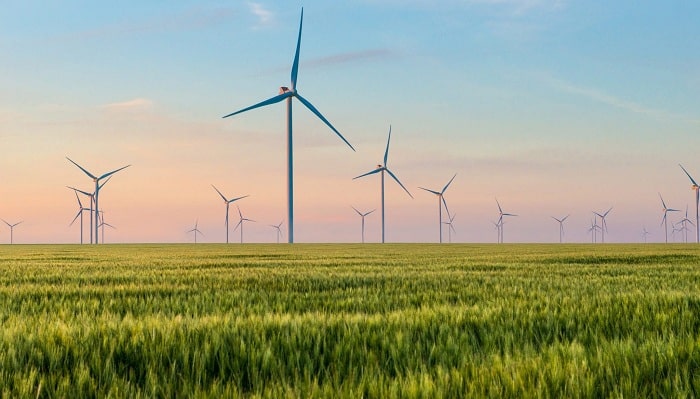 Developers built wind farms with a total capacity of almost 100GW in 2020, a rise of nearly 60% on previous year.

China built more new wind farm capacity in 2020 than the whole world combined in the year before, leading to an annual record for windfarm installations despite the Covid-19 pandemic.

A study has revealed that China led the world’s biggest ever increase in wind power capacity as developers built almost 100GW worth of wind farms last year – enough to power almost three times the number of homes in the UK and a rise of nearly 60% on the previous year.

Most of the world’s new wind farms were built onshore, which more than offset a drop of 20% in the new wind power capacity built at sea.

The report, by Bloomberg New Energy Finance, found that China built more than half of the world’s new wind power capacity. Its onshore and offshore wind farms grew by almost 58GW last year, more than the world’s combined wind power growth in 2019.

Isabelle Edwards, the author of the report, said: “While every region commissioned more wind capacity than the year prior, the unprecedented growth observed in 2020 should be credited to the Chinese wind market.”

Chinese renewable energy developers piled into the market before a looming cut-off for new wind power subsidies from the government, and demand is likely to slow next year.

In the first six months of last year, China was the site of almost 90% of all coal plants under construction, and home to half the world’s operating coal-fired electricity capacity, according to the report.

China’s president, Xi Jinping, surprised UN delegates last year by announcing that the world’s fastest-growing economy would ensure that its emissions peaked within the next five years and declined to net zero by 2060.

But experts have warned that China’s 14th five-year plan, published this month, could lead to a rise in greenhouse gas emissions after it gave few details on how the world’s biggest emitter would meet its new climate targets.

China’s wind power surge was followed by a boom in the US, where developers built 16.5GW of new wind capacity last year, before the phase-out of a government tax credit scheme.

The record windfarm installations were three-quarters higher than than in 2019 and well ahead of the country’s previous installation record set in 2012.

In Europe, new wind farms added 12.6GW of renewable energy capacity last year, including the 752MW Borssele wind farm in the Netherlands and a 539 MW station at the East Anglia One project in the UK.

The surge in windfarm growth across China and the US also toppled Denmark’s Vestas from its place as the world’s biggest wind turbine maker for the first time in five years.

The company was usurped by US turbine firm GE and China’s Xinjiang Goldwind, which were the top two suppliers of turbines globally.

“GE and Goldwind claimed the top two spots in this year’s ranking by concentrating on the largest markets. This strategy may not be as fruitful in 2021 as subsidies lapse in those areas,” Edwards said. “Vestas takes on less market risk, with turbines commissioned in 34 countries last year.”

Vestas hopes to become a leading player in the global offshore wind market by 2025 after agreeing to buy out Mitsubishi Heavy Industries’ 50% stake in their joint venture, MHI Vestas.

Bert Nordberg, the chair of Vestas, said the deal, worth almost €710m (£610m), was the “beginning of a new chapter in Vestas’ history” that would offer strong opportunities as the rollout of renewable energy accelerates.