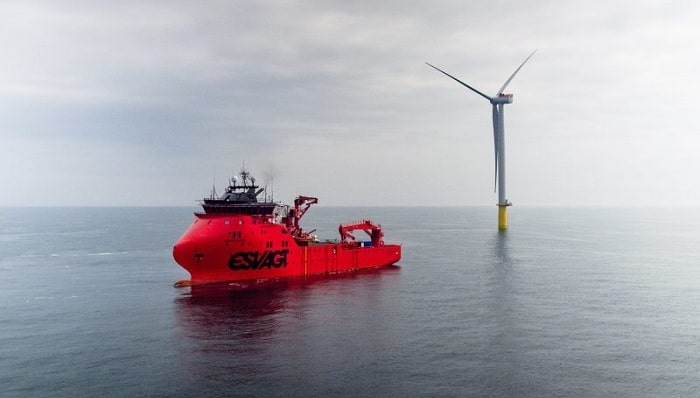 The three companies have joined forces on ‘Operative package deliveries by drones’, an innovation project that will examine potential methods to improve the efficiency of repairing wind turbine generators (WTG).

The goal is to deliver tools and spare parts for WTG maintenance from Esvagt’s Service Operation Vessels (SOV) to a technician at the WTG site via unmanned aerial vehicles.

“When we transfer a WTG technician from vessel to WTG, he brings both spare parts and tools with him. But it often happens that the technician needs additional equipment, tools or spare parts while inside the WTG.

“Today, such a scenario requires the vessel to return to the WTG or that we send a transfer boat over to the WTG with the necessary gear, which the technician then has to get down and get. This process can be optimised.”

The project aims to find a way for drones to deliver packages weighing 3kg to 4kg directly to the WTG nacelle, where a technician will be able to receive the necessary parts and tools.

Hjorth told Power Technology that the focus is on creating an autonomous delivery software that can be added to “off-the-shelf” drones.

Esvagt said the difficulty comes from operating drone deliveries between two constantly moving points. The nacelles move to follow the wind, in addition to their blades spinning, and the SOV is constantly working in different areas of the wind farm.

“Our ambition is to get a drone to transport spare parts between two variable points, following a route that will be adjusted along the way,” Hjorth said.

“It is complex, even when using drone pilots, and it becomes even more demanding once you add the changing weight of the cargo, the wind’s impact, the use of magnetic compass in an offshore farm with lots of steel, and so on. But the potential in finding a solution is extremely interesting.”

Power Technology understands that Esvagt expect to have a functional demonstration of the delivery system within two years.