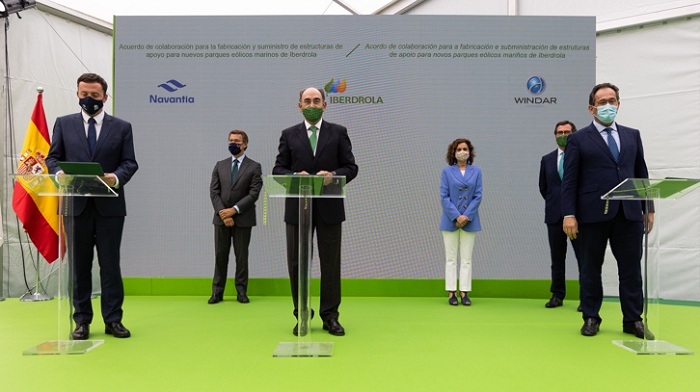 The chairmen of Iberdrola, Navantia and Windar signed a framework collaboration agreement to manufacture and supply XXL monopile foundations as part of the energy company’s growth strategy in offshore wind. The project also strengthens its role as a driving force for local industry, while both manufacturers will increase their capabilities in this sector of the future.

Under the agreement, Iberdrola will be able to place orders for 130 XXL monopile foundations with the Navantia-Windar consortium between 2023 and 2025 for future offshore wind farms, worth up to €400 million, thus securing a preferential supply of a portion of these components for the coming years.

During an event which took place at Navantia shipyards in Fene the agreement was signed by Ignacio S. Galán, Chairman of Iberdrola; Ricardo Domínguez, Chairman of Navantia; and Orlando Alonso, Chairman of Windar. The ceremony was also attended by the President of the Galician Government, Alberto Núñez Feijóo, and María Jesús Montero, Minister of Finance and Civil Service.

The Chairman of Iberdrola, Ignacio S. Galán, said: “Today we are creating an alliance that combines Iberdrola’s growth plans – a global offshore wind pipeline that will require investments of close to €30 billion over the next decade – with the competitiveness and know-how of Navantia and Windar.

“A union – he added – reflecting our vocation to forge alliances with Spain’s industrial community, as the great driving force that we are, through long-term agreements that provide stability and certainty to our suppliers while generating activity and jobs in a sustained manner.”

Not limited to a single project, the framework agreement turns Windar and Navantia into key allies of Iberdrola’s sustainable development strategy until at least 2025.

As a result of the agreement, the consortium formed by Windar and Navantia will erect a XXL monopile factory on land at the Navantia shipyard in Fene (A Coruña). The new factory will improve the shipyard’s capacity to fabricate a new product in great demand in the fixed offshore foundation sector. This diversification was not previously an option, since the process requires very specific facilities.

“We want to stay ahead by investing in state-of-the-art facilities, machinery and equipment in order to be relevant players in this market,” said Navantia’s president, Ricardo Domínguez. He explained that this new collaboration between Windar and Iberdrola is an “innovative and ambitious project”, with which the public company will consolidate its position in a sector with “enormous opportunities.”

“We are confident that this agreement will further strengthen the relationship between all three companies, which will certainly benefit Spanish industry and Ferrolterra,” he added.

The consortium’s planned investment amounts to €36 million with production at these facilities set to provide quality jobs for 1,000 people, which add to the thousands already generated under previous contracts. The new the factory will adapt an existing building for curving thick sheet metal into structures with up to 16-m diameter and will include new paint booths and storage areas for finished products, as well as the latest technology equipment necessary for the manufacturing process.

The new XXL monopile factory, which will fabricate foundations over 100 m long and weighing up to 2,500 tonnes, will be up and running within 13 months and will be housed in a part of the Fene shipyard facility, without interfering with the production facilities for the construction of other offshore wind products, such as jackets and floating structures, where Windar and Navantia are already leading international names.

“Starting this production plant means joining a select club of very few companies in the western world that have capacity for this work. Only four manufacturers, from three European countries, are able to produce what we are going to do in Fene,” said Windar Chairman Orlando Alonso while highlighting that the project will also require “investing in professional skills to create a workforce of highly specialised staff. To do this, ambitious training programmes will be launched, for which we hope to be able to count on support from the regional government.”

In her speech, Spain’s Minister of Finance and Civil Service, María Jesús Montero, highlighted the potential of public-private cooperation to provide “cutting-edge innovation” as well as “the very hard work that Navantia Fene has done” to position itself in offshore wind energy.

She also stressed that “wind energy is going to play a leading role in the decarbonisation of the economy, in the necessary ecological and energy transition on which the modernisation of the production model must hinge”. The minister reiterated that Spain’s Government is determined to ensure that “the commitment to renewable energies leaves no one behind and makes the energy transition a fair transition.”

This agreement between companies, she said, makes it easier for Spain to remain at the forefront of this sector. “Spain is in a position to be an international powerhouse in the blue economy”.

The President of the Xunta de Galicia, Alberto Núñez Feijóo, who closed the event, highlighted offshore wind’s trust in Galicia to open up opportunities for economic recovery. Aware that offshore wind is a booming sector that still needs to be regulated and promoted, Feijóo highlighted the strategy of Galicia to promote this type of wind farms, always in coordination with the fishing industry. The region has created an Offshore Wind Observatory that integrates the industry, the fishing sector and the Administration. He also recalled that Galicia is working together with Asturias and Cantabria to foster offshore wind energy through orderly development that respects the environment and other socio-economic activities.

The agreement between these three companies reinforces Iberdrola’s commitment to the energy transition and its contribution to the green recovery and job creation, associated with renewable projects for the future. It strengthens a relationship between Iberdrola and Navantia-Windar spanning more than seven-year, which has resulted in close to €1.3 billion in orders.

This long-standing relationship is evidence of the opportunities offered by a market of the future – offshore wind – and how the green economy has become a major aspect of industrialisation and sustainable, quality employment.

“This port, which was for centuries considered the end of the earth and which later became the departure point for so many men and women who migrated in search of a better future, has today been confirmed as a hub for innovation, technology and manufacturing capacity,” noted the Chairman of Iberdrola.

The collaboration highlights the role of Navantia’s shipyards in boosting local economies in the different territories. Navantia-Windar are the only manufacturers with an ability to produce all the components required to build offshore wind farms: fixed and floating foundations, towers and electrical substations. “Our commitment with Fene regarding green energy has taken a great step forward today,” said Ricardo Domínguez.

All three companies have ratified their commitment to the different technologies driving fixed and floating offshore wind. “Navantia-Windar has built 85% of the floating structures existing in pre-commercial wind farms and it is our objective to develop as a global leader, taking advantage of the synergies with our main activity, that of shipbuilding, in a type of product and industry where we are sure Iberdrola will play a relevant role,” Domínguez added.

Iberdrola has been leading the offshore wind industry for fifteen years, an activity now confirmed as one of the company’s growth vectors. It already has 1,300 MW in operation -Wikinger, East Anglia ONE and West of Duddon Sands- and is set to triple its installed capacity with the 2,600 MW currently under construction. The group’s offshore wind pipeline is already 20,000 MW, and by 2030, the company expects to have 12,000 MW in operation.

“What started as an initiative linked to a then-nascent technology is now a reality,” explained Ignacio S. Galán. This is demonstrated by projects currently underway, such as the Saint-Brieuc offshore wind farm in Brittany, France, which will have the largest jackets manufactured to date (by Navantia-Windar in Fene); Baltic Eagle in Germany, in which Windar is a participant; and Vineyard Wind 1, off the coast of Massachusetts, the first large-scale project to be installed in the United States.

“And the future looks even more exciting and promising with new projects in the United States, the United Kingdom, Germany, France and Japan, which we will launch in the coming years, and also in countries such as Sweden, Ireland and Taiwan, where we already have developments underway,” explained the Chairman of Iberdrola. He pointed out that “the huge investments represented by each of these projects are only possible in countries with stability and predictability. Attractive, incentivising regulatory frameworks, governmental and social support and, above all, legal certainty are needed.”

In his speech, Ignacio S. Galán also referred to the company’s commitment to “continue innovating to create new opportunities” in the region, as other technologies mature, such as floating offshore wind. This could eventually allow Spanish industrial capabilities to be transferred to projects located off the Galician coast.

For the industrial development in Galicia, in alliance with numerous local companies, Iberdrola has presented the Next Generation EU programme with more than 25 initiatives linked to clean energy, pumped hydro storage, green methanol, electric mobility and the circular economy, which may mobilise €4.4 billion and create 20,000 jobs in the region, in sectors aligned with the European Green Pact.

He also mentioned a network created with countless companies – large and small – that have embarked on the journey with Iberdrola towards sustainability, competitiveness and internationalisation, boosting 400,000 jobs worldwide, 85,000 of them in Spain. Among these companies are more than 200 Galician suppliers, such as Teiga TMI, Técnica 4, CEASA, Sarpel Ingeniería, Conelec and Milsa, which have received orders worth nearly €600 million in the last 18 months alone.

Iberdrola has been leading the energy transition for two decades and acting as a key driving force in the transformation of industry, the green recovery of the economy and job creation. The company has launched a major investment plan worth €150 billion over the next decade, €75 billion by 2025, to triple renewable capacity and double network assets while taking advantage of the opportunities offered by the energy revolution facing the world’s leading economies. Having invested €120 billion over the past twenty years, Iberdrola is a renewable energy leader with nearly 35,500 MW installed capacity; a volume that makes its generation fleet one of the cleanest in the energy sector.