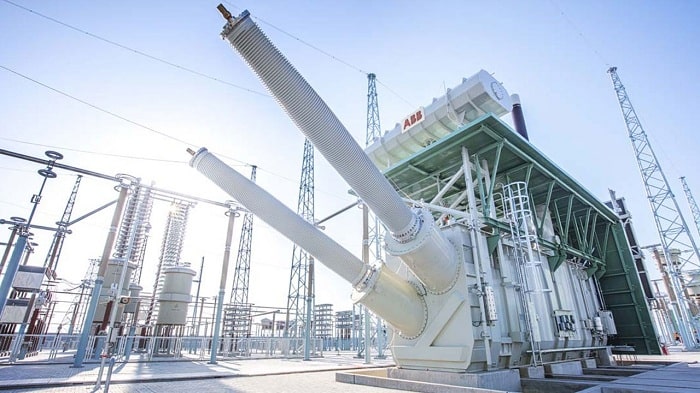 ABB has won a large order to supply converter transformers and high-voltage equipment for an 800 kilovolt (kV), ultrahigh-voltage direct current (UHVDC) transmission link, owned by the State Grid Corporation of China (SGCC), in China’s Shaanxi and Hubei provinces, in the North West and Central regions of the country.

The 1,100-kilometer-long power transmission link will transport up to 8,000 megawatts (MW) of electricity, enough to meet the needs of around eight million people in China. The orders were booked in the first and second quarters of 2019.

“The ultrahigh-voltage (UHV) transmission equipment from ABB is an important milestone in realizing SGCC’s vision of building stronger and greener grids. These UHV super-grids will enable the reliable integration of ever more power sources from remote areas into the power grids of urban centers,” said Claudio Facchin, President of ABB’s Power Grids business.

Converter transformers receive electricity from nearby power stations and increase their voltage to extremely high levels, in order to transport it over long distances and with minimal losses. Near to the end consumer, similar transformers will decrease the voltage in order to ensure distribution to the local grid. High-voltage equipment includes breakers, which protect the grid from disruptive faults, and capacitor banks which improve the quality of the electricity supply, thus increasing the product lifespan and helping to reduce losses.

ABB was a key technology provider to SGCC’s first ultra-high-voltage direct current transmission link. The 6,400 MW, 2,000-kilometer-long Xiangjiaba-Shanghai link, provides hydroelectric power from South West China to the bustling city of Shanghai. Since then, ABB has been constantly pushing the boundaries of long-distance transmission technology, partnering with SGCC in several key projects, thus contributing to energy security, as well as economic support and social development in China.

At 8,000 MW transmission, the Shanbei-Wuhan link will be among the world’s most powerful and is an important step for SGCC in developing global UHVDC systems standards. They will interconnect the electrical grids of regions, countries and continents to efficiently transport clean power in large volumes over long distances.

UHVDC utilizes direct current (DC) electricity at extremely high voltages that can have as much as 40 percent lower losses than an equivalent conventional AC (alternating current) system. This means far less energy is wasted, more power reaches end users and carbon dioxide (CO2) emissions come down. In this case, savings of up to 1,2 million tons of CO2 emissions per year can be expected.

ABB is a pioneering technology leader with a comprehensive offering for digital industries. With a history of innovation spanning more than 130 years, ABB is today a leader in digital industries with four customer-focused, globally leading businesses: Electrification, Industrial Automation, Motion, and Robotics & Discrete Automation, supported by its common ABB Ability™ digital platform. ABB’s market leading Power Grids business will be divested to Hitachi in 2020. ABB operates in more than 100 countries with about 147,000 employees.