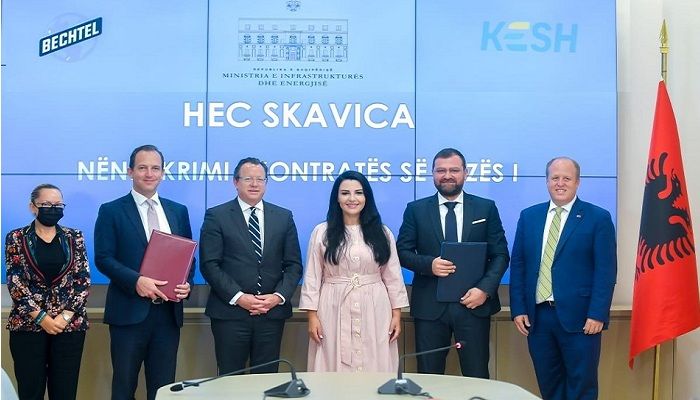 A critically important hydro power plant which will play a significant role in Albania reaching its ambition of energy self-sufficiency is to be delivered by Bechtel.

Today, Albania’s Power Corporation (KESH) and Bechtel signed an agreement to begin the early works for the 210 MW Skavica plant on the Drin river under a fast-track delivery approach.

Work will begin immediately with a technical investigation, preliminary construction roads and the environmental and social impact assessment which will meet international best practice to expedite the start of construction.

“Bechtel is delighted to be selected as a partner in the delivery of the Skavica Dam. We recognise that this is a nationally important project and we look forward to working with KESH as partner, and engaging local companies, supply chains and local people to achieve the immediate and long-term economic benefits which come with infrastructure of this size and scale,” said Andrew Patterson, Bechtel’s Infrastructure Global M&BD and Major Project Development Manager. “Skavica will be located upstream of the Drin cascade, which is home to four hydro power plants. The combination of these existing projects currently produces the largest energy production in the Balkans, with a combined power output of 1,350MW. Skavica will increase the cascade’s output and bring significant additional safety and environmental benefits. As a regulating dam, it will give greater protection against the devastating floods which impact the downstream communities annually.”

“Skavica is different from the other hydropower plants in the Drin Cascade because it will regulate the plants which already exist. It will also increase the domestic production of electricity by hydropower plants in Albania by 20%, while also optimizing and increasing their production capacities,” said Belinda Balluku, Albania Government’s Minister of Infrastructure and Energy. “Another important element of this project is the minimization of floods in the area of Nen Shkodra by optimising the cascade and controlling all flow and discharges during rainfall from autumn to spring.”

“Skavica is a much-anticipated dream; one that we have had since the design of the Drini River Cascade in the 1970s. This project will transform Albania not only into an absolute leader in the regional electrical power sector but also into an electrical power exporter,” said Ergys Verdho, KESH CEO General. “The development of Skavica will reduce Albania’s annual electricity imports by an average of 55% annually, increasing the security of the country’s electricity supply.”

Bechtel has delivered major renewable projects worldwide and is currently completing the 695-MW Keeyask Generating Station in Manitoba, Canada. The company has been supporting civil infrastructure projects in the Balkans since 1992, and we are proud to continue to support the growth of clean energy to the region through infrastructure projects.

Bechtel is a trusted engineering, construction and project management partner to industry and government. Differentiated by the quality of our people and our relentless drive to deliver the most successful outcomes, we align our capabilities to our customers’ objectives to create a lasting positive impact. Since 1898, we have helped customers complete more than 25,000 projects in 160 countries on all seven continents that have created jobs, grown economies, improved the resiliency of the world’s infrastructure, increased access to energy, resources, and vital services, and made the world a safer, cleaner place.