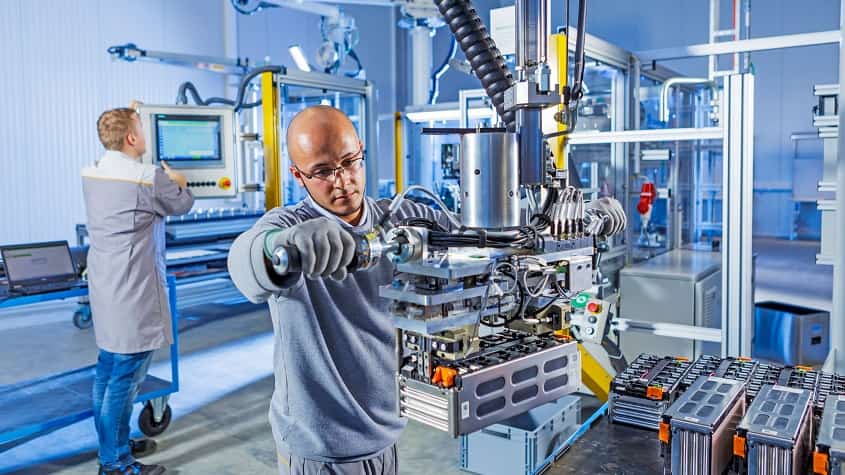 The growing demand for batteries in the transportation sector and in renewable energy systems as a whole is speeding up developments in battery production, with new battery manufacturing technologies and the construction of assembly factories and facilities creating the infrastructure needed for mass and batch production.

This period of change is opening up a wealth of opportunities to car manufacturers and suppliers. In fact, the consultancy firm Deloitte predicts that the market for batteries and fuel cells in Germany, China and the NAFTA region, which encompasses the USA, Canada and Mexico, could grow from its current value of 5.5 billion euros to more than 81 billion euros by 2025. ees Europe – Europe’s largest and most- visited exhibition for batteries and energy storage systems – is dedicating an entire exhibition segment and an extensive presentation program to this important topic.

The battery production sector is benefitting from the growing appeal of clean transportation. For instance, the automotive industry has announced plans to step up its activities in the area of electric cars this year, with the likes of Audi, BMW, Mercedes and VW all intending to be in a position to compete with current market leader Tesla by 2025 by offering electric versions of at least 15 to 25 percent of their vehicle models. Meanwhile, in the area of energy supply, there is a growing need to store electricity generated from renewable sources such as photovoltaics, so that it can be used elsewhere and at a later point in time. This is because electricity storage systems are essential, if the German government’s plan to increase the share of clean energy in the power supply to 50 percent by 2030 is to succeed.

These developments mean that more batteries are needed across all energy sectors. Advances in battery production technology are vital to increase output rates and reduce costs. In Germany, significant headway has been made in this field. For example, the automobile manufacturer Daimler is extending module production in its battery factory in Kamenz, while the battery manufacturer Akasol opened the largest battery production facility in Europe in Langen in 2017. 10,000 battery systems per annum are expected to roll off the production line at the latter over the next five years.

Upswing in cell production in Germany and Europe
Europe is set to play a greater role in cell manufacture in the future. China and Korea have been the main market leaders in this field to date. However, importing cells is a laborious process for companies based in Europe. What’s more, battery cells are used worldwide, meaning that car manufacturers and other purchasers have to share the number of cells available on the market with their international competitors. This could all be about to change, as the establishment of TerraE Holding in 2017 is seeing cell production take place in Germany and therefore far closer to home for European companies. The consortium consists of 17 companies and research institutes, including BMZ Holding GmbH, manufacturers of industrial battery modules, Siemens AG and ThyssenKrupp Engineering GmbH. In January 2018, TerraE Holding intends to begin to research and develop ways of mass producing lithium-ion battery cells. Its aim is to gradually extend manufacturing capacity to up to 34 gigawatt hours (GWh) a year by 2028. Car manufacturers like BMW and VW are also forging ahead with plans to develop their own battery cells. If the number of battery cells they require continues to rise, investing in such endeavors will prove more worthwhile than importing parts from Asia. Moreover, doing so could give them a crucial edge in the fiercely competitive car market.

Germany is well on its way to establishing its own value chain for battery storage systems, allowing it to meet its demands self-sufficiently. Machine and plant construction firms will benefit from this the most in the long run, since the transition in the automotive industry is also bringing about changes to Germany’s traditional industrial sector. Instead of focusing on manufacturing cylinders and camshafts for internal combustion engines, mechanical engineers can strike out in new directions thanks to the increase in battery production. This is an important development because in order to remain prosperous in the future, mechanical engineering firms must explore alternative, sustainable lines of business just like the automotive industry.

Battery cell research is revolutionizing the market
German research activities are focusing heavily on developing battery technology. RWTH Aachen University, which is also an active member of the TerraE consortium, is conducting research along the entire energy storage value chain. The German Engineering Federation (VDMA) is also driving forward innovations along the battery production process chain by regularly bringing together researchers, manufacturers and users. The German government’s decision to provide TerraE with 5.5 million euros of funding over 18 months is further helping to step up battery cell production in Germany. Moreover, the European Commission believes that gigafactories are eligible for funding and is said to be planning to invest 250 million euros a year in expanding new mass and batch production facilities in Europe.

Research and development activities are also focusing on finding alternatives to using lithium and cobalt to manufacture batteries. The German Mineral Resources Agency (DERA) estimates that the global demand for lithium-ion batteries will at least double by 2025 from its current level of around 33,000 metric tons. Work has already begun on developing battery technology in such a way that will allow replacements to be found for materials such as cobalt that have the potential to become scarcer in the future. Besides recycling becoming more and more significant, this will lead to automobile manufacturers and other battery users placing increasing value on environmental and social standards in order to make the battery supply chain sustainable.

ees Europe covers the latest trends
ees Europe is picking up on the topic at both the exhibition and the ees Europe Conference. Attendees with an interest in battery production technologies can meet at the Battery Production Forum in hall C1 at Messe München. On each day of the exhibition, experts from production companies, associations and research institutes will be on hand to shed light on the latest developments and innovations. The forum is part of an exhibition segment dedicated to battery production technologies and covering all of the industry’s hot topics, from plant construction and battery research to battery components. The ees Europe Conference will also shine the spotlight on the topic during several sessions discussing the latest battery systems, innovative materials, product automation, design concepts and recycling.

ees Europe and the parallel events will take place from June 20–22, 2018 under the umbrella of The smarter E at Messe München.

About ees Europe
ees Europe is the continent’s largest and most visited exhibition for batteries and energy storage systems. Since 2014, ees Europe has been held annually at the Messe München exhibition center in Munich. It serves as the industry platform for manufacturers, distributors, users and suppliers of stationary and mobile storage solutions for electrical energy as well as battery production technologies.

In 2018, ees Europe is taking place in parallel to Power2Drive Europe, the exhibition for charging infrastructure and e-mobility, for the first time. With its focus on traction batteries and topics relating to charging infrastructure, Power2Drive complements ees Europe perfectly. Intersolar Europe, the world’s leading exhibition for the solar industry and its partners, and EM-Power, the new exhibition for the intelligent use of energy in industry and buildings, will also take place at the same time. All four exhibitions are being held under the umbrella of The smarter E Europe – the innovative platform for new energy solutions.