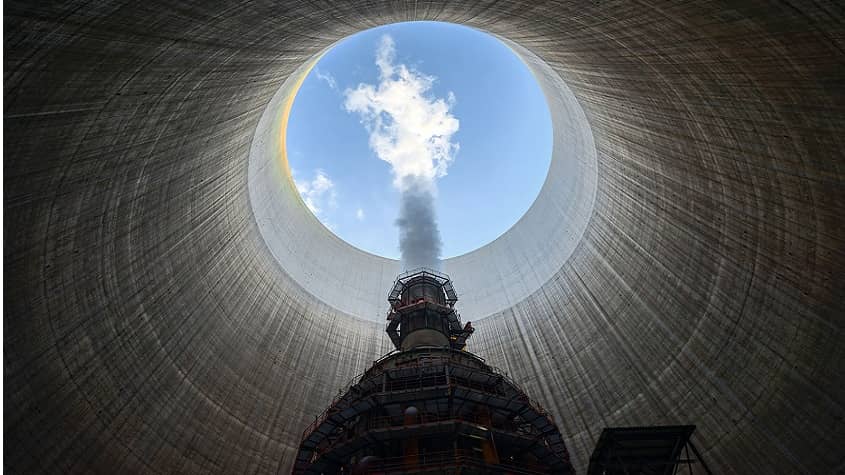 Inspection of a Nuclear power plant
Flyability’s collision-tolerant Elios UAV has been used at a major nuclear power plant, proving the case for Elios in the normally inaccessible spaces of a nuclear reactor building.

Elios was used for two different missions: to perform the required annual survey of underground tank rooms at the plant, and to investigate a suspected leak inside of the reactor building. Both missions were critical to the safety of the staff, minimizing their exposure to harmful radiation. Elios’ ability to fly in confined spaces to capture high resolution videos makes it the ideal tool for the job.

Customer Needs
Nuclear energy plants are some of the most highly regulated and safety conscious worksites in the world. A leak or an accident could have serious consequences, and the inspection processes in place to avoid problems are time-consuming and costly.

The customer’s primary concern is safety: personnel must follow detailed processes to avoid unnecessary exposure to radiation. For a routine annual inspection of three underground tank rooms, inspectors must access each of the three rooms by a ladder, passing from low dose areas (safe areas) at the top of the ladder to higher dose areas (protected by locked doors and shields.) The process requires that inspection personnel dress in a full suit of disposable anti-contamination clothing before entering each room, take pictures of various points inside the space to evaluate the condition of the assets, and remove the anti-contamination clothing again after leaving each room. In addition to the inspector, a radiation monitor is required to accompany him, exposing two people to radiation during each inspection. After the inspection of 3 tank rooms is performed, six sets of anti-contamination clothing must be stored as waste and shipped for disposal.

Flyability’s customer uses extremely sensitive leak detecting equipment in order to identify possible seepages before they become a problem. Any potential leak detected must be evaluated. Without Elios, this means bringing the output of the plant down to 20% in order to make the inspection humanly feasible. The powering down process takes about six hours – half a shift – to accomplish safely, with another six hours used to bring power back up slowly after the inspection.

The inspection itself is a difficult process. “We used to send a person with a flashlight,” explains the customer. That person and the required radiation monitor could each receive up to 250 millirem (2’500 µSv) of radiation – about 10% of the annual limit for radiation exposure – during a 1-2 minute inspection of the inside of the reactor building, even with the power reduction. The exposure time is increased by the time it takes to enter the space and climb the ladders to reach critical areas.

Solution
To inspect the underground tank rooms, operators flew Elios down the ladder to the rooms while remaining above in a low dose area. Elios flew inside of the room for about 1 minute, gathering a panoramic video of the entire space for later evaluation. An operator retrieved the drone at the top of the ladder using only a glove for protection against potential contamination and the team moved on to the next room.

In the second mission, the inspector flew Elios inside the reactor building to investigate the suspected leak located 20 feet (6 meters) off the ground at the top of a tank while remaining in a lower-risk area. The Elios flew for about 10 minutes and took video of the critical valve, which was then evaluated by a team of inspectors and managers. The Elios cage allowed the operator to fly even in narrow or confined spaces.

Results
Inspectors found that the data gathered during the one-minute flight inspections of the tank rooms was more comprehensive than that gathered by traditional methods, while avoiding the need to send personnel into a high-risk area. The inspection team did not need to do anti-contamination clothing or travel down the ladders, bringing the total time investment to inspect three rooms from 1.5 hours down to less than 15 minutes.

The team of inspectors and managers evaluating the footage for a possible leak concluded, based on a frame-by-frame review, that a leak did not exist. The high-value images allowed for a minute examination of a valve at the top of the tank in the reactor building. Personnel were not required to climb to the critical areas and significantly reduced radiation exposure.

Conclusion
Elios saved the customer 6 hours for the powering-down process, 6 hours to power back up, and the costs associated with reduced output during evaluation of the reactor building. The average power production of a nuclear reactor is about 24GWh per day; at the average wholesale price of electricity per KWh ($.12) and the average production price per KWh ($.025) a nuclear reactor generates about $2.3 M USD net per day. Using that estimate, the savings generated by retaining full output for approximately 12 hours approaches $456,000.

Additionally, using a drone allows for more time in the reactor building. Elios was able to fly for 10 minutes to gather data and could have performed multiple flights if the problem had to be further investigated. Comparatively, the danger of radiation exposure limits human inspections to 1 -2 minutes which already represents 10% of the annual limit for radiation exposure. The precise video that Elios generates made it possible for the customer’s inspection and management team to obtain detailed information about their assets. The inspection of tank rooms by drone also offered the customer savings in time and personnel costs.

Plant Engineering staff determined that the low weight (1.6 lbs, 720 g) and the low RF power output (100 mW) pose an acceptable risk for use inside the building during operation. The proven success of Elios in the nuclear environment opens up the possibility for more applications. In some plants, turbine rooms or other high dose areas may be surrounded by protective shields of about 10 meters high, open at the top. While risky for inspectors to enter the spaces, Elios could easily fly over the top of the shield to gather information from gauges or other equipment in high exposure areas. Many of the routine inspections required at the plant could be performed by the Flyability solution, offering further time and cost savings while providing significant gains in safety.
Link to the case study on our website: http://www.flyability.com/casestudies/inspection-of-a-nuclear-power-plant/.