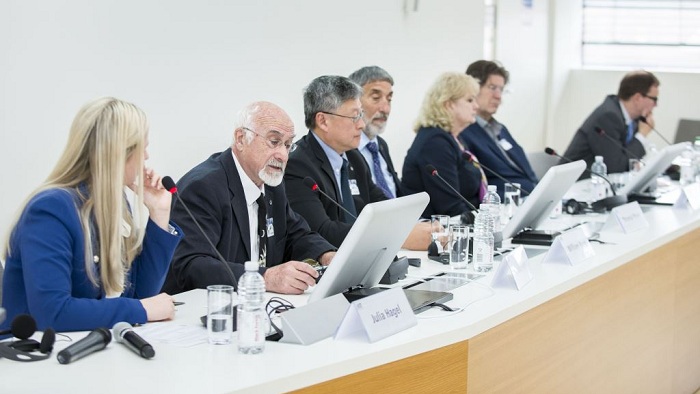 Universal access to affordable, reliable, sustainable and modern energy is one of the 17 global goals of the UN 2030 agenda for sustainable development. One of the VIII Global Energy Prize Summit`s round tables, held at the Karlsruhe Institute of Technology (KIT), Germany, was devoted to the discussion of the requirements for achieving this goal. Representatives of the energy sector from 6 countries identified the economic, environmental, social aspects of the energy goal of the 2030-agenda, as well as the role of international energy cooperation.

The participants of the discussion agreed that the availability of energy is one of the determining factors that allows to achieve the rest of the UN sustainable development goals. Reliable energy is needed to address security, climate change, food production, poverty reduction, economic development, education and health. But experts convinced that humanity has much to doon the way to achieve the seventh goal of the UN agenda by 2030.

In recent years, the proportion of the world’s population with access to electricity has increased from 78% to 87%, thanks to recent progress in electrification, especially in economically backward countries. However, nearly one billion people worldwide still have no access to electricity. Given that energy demand continues to grow, it will require significant investment in infrastructure, systemic integration and strong political action. In this scenario, the share of renewables in the global energy mix will be 50% by 2035 and carbon emissions due to the decrease in demand for coal will be reduced, says Marta Bonifert, Member of the Global Energy Prize International Award Committee, Board Member of the Hungarian Business Leaders Forum (HBLF), Environment and Sustainability WS Leader.

She also added that the key to success in achieving the UN goals is the joint work of all state and non-state actors. “We need visionary transformational leaders, as well as leadership from government, science, politics, business and society, to lead this process. The Global Energy Prize is a vivid example of this and a real accelerator of change”. For 17 years, it has played a crucial role in the field of energy, showing the world of scientists whose innovative developments are transformative, expand the boundaries of science and open up new opportunities for humanity,” the expert concluded.

Michael Williamson, Section Chief of the Energy Division in the United Nations Economic and Social Commission for Asia and the Pacific (UNESCAP) told about the necessity for integrated work for sustainable development. In his opinion, there are a number of obstacles that require special consideration and search for compromises. First, countries are at different stages of development in terms of their energy capacity, technological solutions and infrastructure availability. Regional groupings can play an important role in the gap between states, which will ensure the exchange of ideas and develop a common plan of action. Secondly, the implementation of the remaining UN sustainable development goals may require an increase in energy supplies, which in turn may complicate the task of implementing the seventh paragraph.

For example, the second goal of the 2030 Agenda is related to the elimination of hunger, but about 3 billion people use traditional biomass or coal for cooking, which causes damage to their health and the environment. In this regard, it is necessary to provide the possibility of cooking in “clean” conditions.

According to the expert, it is necessary to increase the generation of energy from solar and wind power stations by 3-5 times to achieve the sustainable development goals, but this requires political will and concerted actions of various states. David Faiman`s idea about the future weakening influence of traditional energy sources was supported by William Byun, Member of the Global Energy Prize International Award Committee, Managing Director at Asia Renewables, Head of Green power fuels and Principal at Conchubar Infrastructure Fund. According to him, global investment in coal-fired power plants will decline, but demand for electricity, especially in developing countries, will continue to grow and increase by 30% by 2035. Therefore, it is necessary to rapidly increase RES, and public and corporate investments in research and development can contribute to this process.

The massive development of renewable energy sources is indispensable condition for achieving the seventh sustainable development goal – was accepted by all participants in the discussion. And most often, the advantages of using solar and wind energy were cited as an example. However, Tom Blees, Member of the Global Energy Prize International Award Committee, President of the Science Council for Global Initiatives (SCGI), believes that solar and wind energy is not enough to cover the growing demand for electricity. “Wind and solar power plants require areas equal to South America to provide environmentally friendly electricity to every citizen of the Earth”, he said.

The expert is convinced that nuclear energy is the key to achieving sustainable energy development. Among the promising options for nuclear installations, he highlights the low-pressure thorium reactors on molten salts. According to the project, such installations can be located on ships and transported to regions in need of electricity. Thus, they can become available sources of energy, especially for developing countries that do not have the means to build their own nuclear facilities. As a result, it will improve the quality of life of their citizens and raise production.

Thorsteinn Ingi Sigfusson, the 2007 Global Energy Prize laureate, Director General of the Innovation Center of Iceland, told about other methods of obtaining energy from renewable sources have told. Professor Sigfusson is the author of developments in the field of hydrogen and geothermal energy. He presented the possibility of using energy of the warm Gulf Stream for heating of residential premises on the island of Vestmannaey jar. “The technology of heat pumps makes it possible to take sea water, the temperature of which is about 8°C and to extract heat from it. To power heat pumps requires 12 megawatts of electricity, and their efficiency – three times more: they give 36 megawatts of thermal power, which can significantly save resources. We have already managed to save 17 million watts of energy,” the scientist said.

He also added that now his team is working on a new method of fishing. The principle is to use light rays instead of nylon nets. At the moment, 650 liters of oil is spent on catching 1 ton of fish, while 65% of the oil used falls on fishing trawl. “The reason for such innovations in my country is the paradoxically high level of CO2 emissions per capita, despite the fact that Iceland has the highest level of renewable energy use in the world – 82%. We are looking for any ways to reduce our carbon footprint,”the Professor concluded.

Summing up the discussion, the experts made a conclusion that with the increase in the population, the need for clean energy will only grow. To meet the demand for electricity, it is necessary to increase the share of renewable energy in the global energy mix, improve energy efficiency, increase investment in clean energy sources, and all these measures should be taken into account the socio-economic aspects of a region. At the same time, states must show the political will to achieve a single solution that is environmentally and economically effective as well as socially just.