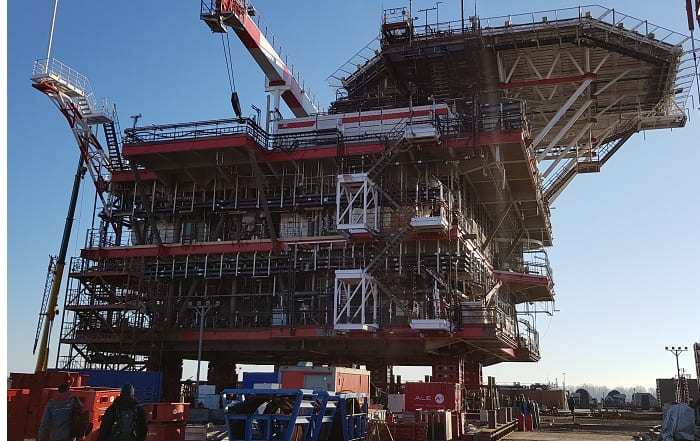 ALE completed the jack-up, skidding and load-out of an off shore platform for the third development stage of the Vladimir Filanovsky oil field, the largest in the Russian section of the Caspian Sea. The field currently produces six million tonnes of crude oil per year.

The operation brought a topside and deck support frame (DSF) together to form a satellite platform, before the whole structure was loaded-out. This was the first time that the unique jacking capabilities of the Mega Jack 800 had been used in Russia.

ALE first carried out the weighings for both separate structures and then prepared for the jacking operations. This was the first time ALE had combined their Mega Jack 800 with their jack and pack system. By combining both systems, ALE was able to provide another two jacking columns in addition to the Mega Jack 800’s standard four towers.

Due to the limited space available on site, neither cranes nor forklifts could be used to position the jacking system underneath the topside. ALE overcame this by using their skidding system to manoeuvre the jacking towers into position.

These operations normally involve the DSF being positioned underneath the topside, which is then jacked-down. However, the layout of the DSF and its jacking points required both structures to be moved, with the topside pulled over the DSF and into its final position.

The load-out of the platform was made more challenging by the high amount of friction, but the experience and resources of the ALE – Offshore Services’ team enabled the manoeuvre’s smooth completion with strand jacks.

Throughout the project, ALE maintained close communications with the clients. Combined with extensive planning and preparation, this enabled a good level of cooperation between all parties involved, resulting in smooth transitions between the various stages with minimal disruption.

ALE has a Smarter, Safer, Stronger solution to any heavy transportation or lifting challenge, no matter how complex.