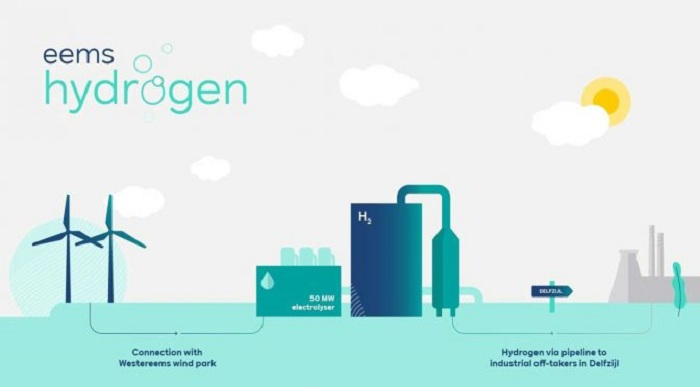 “NortH2 is one of the most ambitious hydrogen projects in Europe. As a new partner, RWE will contribute its broad expertise to create a powerful infrastructure for green hydrogen in Northern Netherlands. We are the world’s second biggest operator of offshore wind farms and have experience in the field of electrolysers, making us the ideal partner for NortH2.”
Roger Miesen, CEO of RWE Generation

In February 2020, the NortH2 consortium of companies was launched with the aim of developing a centre for green hydrogen for north-western Europe, based in Northern Netherlands. Partners on the NortH2 project are the energy company Shell, the gas network operator Gasunie and the port of Groningen Seaports. And now RWE. The energy company will contribute its broad expertise in renewables and hydrogen to the project. With Equinor, a further company has joined NortH2.

The NortH2 partners intend to jointly establish a system of offshore wind farms, electrolysers, gas storage and pipelines in order to convert offshore wind power into green hydrogen, store it and transport it to industrial clusters in north-western Europe. The aim is to create a generation capacity of 4 gigawatts (GW) by 2030. NortH2 can thus play an important role in achieving the EU target of installing at least 40 GW of hydrogen electrolysers across Europe by 2030. By 2040, the capacity of NortH2 is expected to grow to over 10 GW – enough to produce 1 million tonnes of green hydrogen per year. This would mitigate 8 to 10 million tonnes of CO2 per year.

Together with its NortH2 partners, RWE is conducting a feasibility study that will last until 2021. Subject to a positive outcome, initial development activities could begin in the second half of 2021.

In RWE, the NortH2 consortium has gained a partner that is positioned along the entire value chain for green hydrogen: RWE Renewables – the world’s number two in the field of offshore wind – can supply clean electricity for hydrogen production.

RWE Generation has the know-how to produce green hydrogen. RWE Gas Storage can store hydrogen in its gas storage facilities, and the energy trading company RWE Supply & Trading can supply the fuel to industrial customers in line with their needs.

RWE is already driving forward some 30 projects in the Netherlands, Germany and the UK. In the Netherlands, these are Eemshydrogen and FUREC. Eemshydrogen aims to develop a 50 Megawatt (MW) electrolyser in Eemshaven which will help the local chemical industry to decarbonise its processes. FUREC is about producing hydrogen from waste streams in the Limburg region. GET H2 is the largest hydrogen project in Germany. It aims to create the first publicly accessible hydrogen network in the country with scalable industrial production of green hydrogen. Under GET H2, RWE plans to build Germany’s largest electrolyser in Lingen, with a capacity of 100 MW.

The electrolysis capacity in Lingen can be expanded by 2 GW. RWE is also a member of the AquaVentus project off the coast of Heligoland in the German North Sea. AquaVentus aims to produce hydrogen using offshore wind energy, with the island of Heligoland serving as a central hub. In the UK, RWE is working with partners in industrial clusters to examine how hydrogen infrastructures can be used.

Roger Miesen, CEO of RWE Generation, emphasises: “A project like NortH2, which produces green hydrogen to decarbonise industry, can contribute to achieving the Dutch and European climate targets for 2030 and to implementing the Paris agreement. We are committed to ensuring that a hydrogen market can develop rapidly in Europe.”