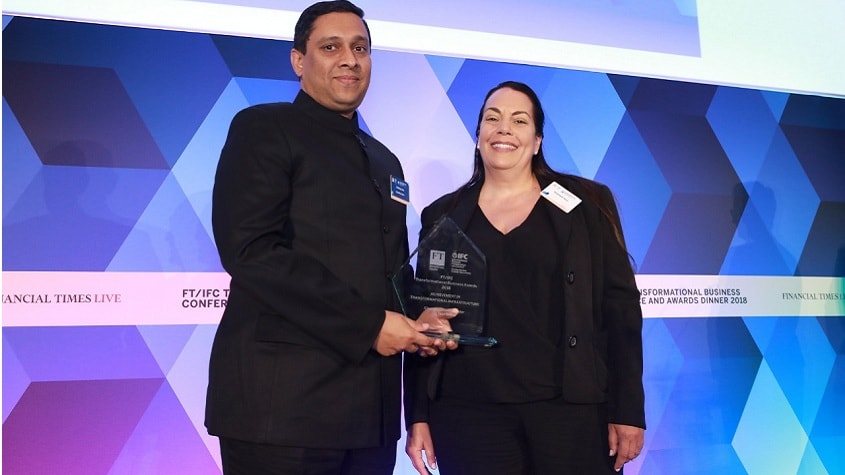 Financial Times (FT) and International Finance Corporation (IFC), a member of the World Bank Group, announced CleanMax Solar, India’s most trusted sustainability partner for the corporate segment, as the winner in ‘Achievement in Transformational Infrastructure’ in the Transformational Business Awards 2018.

The company was shortlisted out of the 189 entries received from across 126 countries. CleanMax Solar is the first Indian company to win this award in the ‘Achievement in Transformational Infrastructure’ category with Tata Motors at their Sanand facility in Gujarat. The award was received by Mr. Kuldeep Jain, Founder, CleanMax Solar from Stephanie Race, CEO, Crop Performance (name of IFC / FT awards presentor) during awards ceremony held in London.

This is the fifth edition of the FT/IFC Transformational Business Awards, the global programme highlighting innovative, long-term private sector solutions to major development challenges. In 2015, CleanMax Solar provided a solar rooftop solution to the Tata Motors facility where the Tata Nano car is manufactured. The rooftop solar plant was developed on a “build-own-operate” model, which enabled Tata Motors to switch to solar power in zero-capex and risk-free manner.

Through this project, Tata Motors not only reduces its carbon footprint by 2700 tons annually for a period of 25 years, but also locks in a large fraction of its electricity cost from solar power, at a discount to grid electricity tariffs. It is estimated that Tata Motors is saving around INR 3 million annually. The solar plant has also reduced the indoor temperature of the factory and generated long-term local employment opportunities.

Commenting on this, Mr. Kuldeep Jain, Founder and Managing Director, CleanMax Solar, said, “We are extremely humbled and honoured to receive this prestigious and globally regionsed award from Financial Times & IFC. It gives us motivation to continue working towards a sustainable future by providing innovative solutions which are also viable for corporates. I would like to thank FT/IFC Jury members for recognizing our endeavours and also all the employees and stakeholders at CleanMax Solar who work relentlessly to ensure quality project delivery.”

CleanMax Solar has installed more than 250 projects for over 70 corporates in India, with combined on-site capacity of 100 MW and commissioned around 300 MW of grid connected solar farms for its corporate consumers. CleanMax Solar is an Warburg Pincus, global private equity firm and International Finance Corporation (IFC), a member of the World Bank Group investee company and in fact the first equity investment globally by the World Bank group in a rooftop solar company.

About CleanMax Solar:
CleanMax Solar is India’s largest provider of solar power to corporates. The company was founded in 2011, and since then, CleanMax Solar has successfully installed more than 250 projects for over 70 corporates, with a combined on-site capacity of more than 100 MW. CleanMax Solar is the #1 rooftop solar developer in India for the past three years, with a market share of 24 per cent (as per the Bridge to India May 2017 report). CleanMax Solar also operates over 300 MW of solar farms in Karnataka and Tamil Nadu, for supply to its corporate customers.

With clients spanning sectors such as Automobiles, Education, Pharmaceuticals, Food & Beverages, and Information Technology, the company develops projects on a turnkey basis, providing power on a per-kWh basis, under long-term Power Purchase Agreements, at rates cheaper than prevailing grid tariffs. CleanMax Solar has been recognized by the Ministry of New & Renewable Energy (Government of India) with National Excellence Awards for Rooftop Solar Developer and Rooftop Solar EPC Player in 2016 and has won the National Award for sustained excellence in solar energy by World CSR forum in 2017. CleanMax has also been awarded the Best Rooftop Solar Player at the Renewable Energy Exposition (REI) 2017. For more information, log onto www.cleanmaxsolar.com