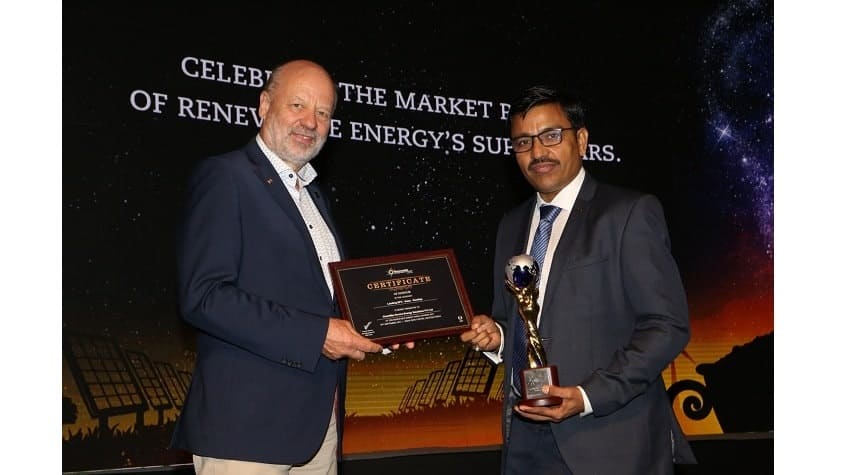 Recognizing excellence in the field of renewable energy, the awards identify and celebrate companies that have showcased operational excellence as in design and engineering services for renewable energy power plants. Mr. Umakant Shende, COO, CleanMax Solar, received the award on CleanMax’ behalf at the ceremony held at India Expo Center, Greater Noida.

The awards aim at encouraging ground-breaking innovations and initiatives to further assist and proliferate sustainable change in India’s renewable energy sector. Renewable Energy India Awards (REIA) recognizes key industry players that have efficiently contributed to the renewable energy market. After a comprehensive and rigorous selection process, CleanMax Solar emerged victorious from amongst several nominations that were judged by a panel of eminent experts.

Commenting on the accomplishment, Kuldeep Jain, Founder & Managing Director, CleanMax Solar said, “We are delighted and honoured with this acknowledgement conferred upon us while recognising and reinstating our position as an industry leader in on-site solar developer category. CleanMax Solar today is widely recognized as sustainability partners of choice for corporates in India. The recognition, garnered by means of these awards, further propels us to assist corporates in India & abroad to achieve their sustainability goals in a risk free, capex-free, and hassle-free manner and also help them save around 20-30% cost on their electricity bills.”
“With clients in the automobile, education, F&B, IT, pharmaceuticals, PSUs and infrastructure segment under our belt, with each commissioned project, we are seeing a tremendous growth in the sector”, he added.

This year, the third consecutive year, CleanMax Solar has been conferred India’s #1 rooftop solar developer with a market share of 24% by Bridge to India Rooftop Solar Map 2017. In addition to REI award, CleanMax Solar has also been awarded RISE 2017 award in “Excellence in Solar Park” by Mission Energy Foundation; and the National award for sustained excellence in solar energy” by World CSR forum in 2017.

About CleanMax Solar:
CleanMax Solar is India’s largest on-site solar power provider. The company was founded in 2011, and since then, CleanMax Solar has successfully installed more than 200 projects for over 50 corporates, with a combined on-site capacity of more than 85 MW. CleanMax Solar is the #1 rooftop solar developer in India for the past three years, with a market share of 24 per cent (as per the Bridge to India 2017 report). CleanMax Solar built Karnataka’s first open access solar farm, of 30 MW capacity, in the Tumkur district, and operates multiple solar farms to supply electricity to corporate consumers on an open access basis across the states of Karnataka and Tamil Nadu, with a combined capacity more than 60 MW.

Focused on corporate and institutional clients in sectors such as Automobiles, Education, Pharmaceuticals, Food & Beverages, and Information Technology, the company develops projects on a turnkey basis, providing power on a per-kWh basis, under long-term Power Purchase Agreements, at rates cheaper than prevailing grid tariffs. CleanMax Solar has been recognised by the Ministry of New & Renewable Energy (Government of India) with National Excellence Awards for Rooftop Solar Developer and Rooftop Solar EPC Player in 2016; and has recently won the National award for sustained excellence in solar energy by World CSR forum in 2017. In both years, 2016 & 2017, CleanMax Solar has been awarded the RISE award in “Excellence in Solar Park” by Mission Energy Foundation.

About the REI Awards:
The annual Renewable Energy India Awards (REIA) by UBM India are dedicated to recognising and encouraging industry players who strive hard to bring a sea of change in India’s renewable energy market with ground-breaking innovations & initiatives. These awards are conducted methodically to draw out the best in the industry, with a process driven robust approach with advisors and jury that comprises industry think tanks who have championed their respective domain expertise from various facets of the RE sector.