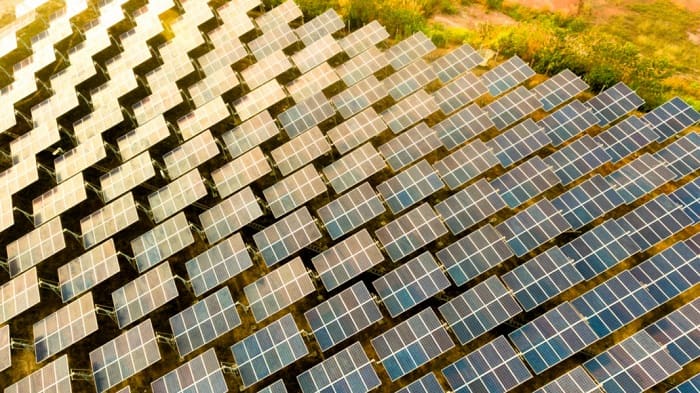 First Solar, Inc. announced a commitment to power 100 percent of its global photovoltaic (PV) solar manufacturing operations with renewable energy by 2028. As part of an interim goal, the company has pledged to transition its facilities in the United States to carbon-free electricity by 2026.

The commitments, which cover the company’s Scope 1 and Scope 2 emissions, were announced as First Solar joined RE100, a global, collaborative initiative bringing together influential businesses committed to 100 percent renewable power. RE100 is led by international nonprofit the Climate Group in partnership with CDP.

“Making a credible commitment to go 100 percent renewable is not a decision we take lightly. It was essential for us to ensure that the promise that we make today is one that we can keep,” said Mark Widmar, chief executive officer, First Solar. “With this pledge, we will further lower our embodied carbon footprint, already the lowest in the industry, and move towards realizing the full promise of cleaner solar. We recognize that the solar manufacturing industry has a collective responsibility to set challenging decarbonization goals for itself, and we hope that our decision encourages other PV manufacturers to make their own commitments.”

The only American company among the world’s largest solar manufacturers, First Solar celebrated two decades since its founding in 1999 and has shipped over 25 gigawatts (GW)DC of PV modules to over 45 countries around the world. With facilities in the U.S., Malaysia, and Vietnam, First Solar exited 2019 with a total global annualized manufacturing capacity of 5.5GWDC. It is also the Western Hemisphere’s largest solar manufacturer, with a 1.9GWDC manufacturing footprint in Ohio.

“By relying on long-term, fixed-price renewable energy, we’re not only investing in reducing our exposure to energy price volatility, but we’re also investing in a sustainable energy future,” said Mike Koralewski, chief manufacturing operations officer, First Solar. “As part of our strategy, we will strive to support the delivery of additional renewable energy capacity, especially in emerging corporate renewables markets in Malaysia and Vietnam.”

First Solar’s thin film PV module technology, designed and developed at the company’s research and development (R&D) centers in California and Ohio, has a carbon footprint that is up to six times lower than crystalline silicon PV panels manufactured using conventional, energy-intensive production methods. Its modules already deliver the lowest carbon solar electricity available today, and the company anticipates that the carbon footprint of its modules will decrease by an additional 40 percent by 2028.

“We’re glad to see First Solar leverage its extensive experience in enabling corporate renewables to decarbonize its own operations,” said Sam Kimmins, head of RE100, the Climate Group. “Today’s RE100 pledge is the natural evolution of its commitment to sustainability and carbon-efficient manufacturing. We urge others in the solar manufacturing industry to follow suit and commit to 100% renewable electricity.”

With over 1GW of corporate power purchase agreements (PPAs) signed, First Solar is an industry leader in corporate solar. Its track record includes projects to support the decarbonization efforts of RE100 members such as Apple, Facebook, Kellogg’s, and Microsoft.