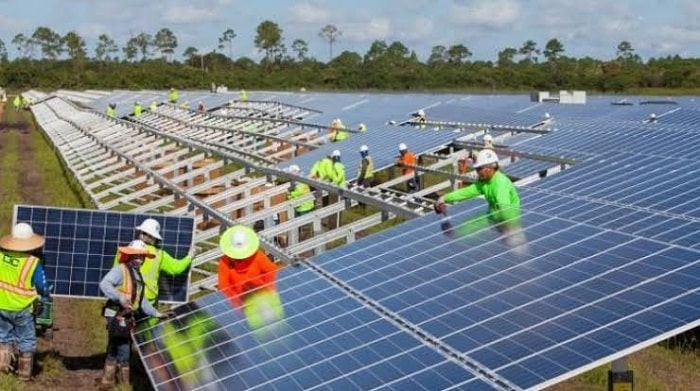 New-build solar and wind could outcompete most existing fossil fuels by 2025, NextEra Energy executives have predicted even as they described storage-only ventures as a worthy venture.

Jim Robo, chair and CEO of the energy giant, shared the firm’s bullish outlook on renewable project economics as he spoke on a recent conference call discussing its full-year financial results.

Predicting lower prices for new near-firm wind (US$20-30/MWh) and solar (US$30-40/MWh) by 2025, Robo added: “At these prices, new near-firm renewables will be cheaper than the operating costs of most existing coal, nuclear and less fuel efficient oil and gas-fired generation units.”

The remarks came as results for NextEra Energy Resources, its flagship development arm, showed the unit commissioned 2.7GW across all renewables last year. Between January and December, the firm claims to have amassed a PV, wind and battery project backlog of 5.8GW.

According to NextEra, 1.6GW of the full-year 5.8GW backlog boost was added between October and December alone. This last-minute surge included 770MW of new solar and 340MW of new battery storage, the firm said, noting that the latter will be fully collocated alongside solar.

The firm claimed using a non-GAAP metric – what it described as adjustable earnings – revealed instead a 2018-to-2019 jump for the NextEra group, from US$3.67 billion to US$4 billion. NextEra said it believes the metric offers a “more meaningful representation” of its earnings power.

The wider market appeared to endorse NextEra’s claims of a financially sound 2019. When trading ended last Friday, the firm’s shares on New York exchange had rallied to a 52-week peak of US$264.08, according to a statement by the trading venue.

The firm’s update extended to its Florida Power & Light (FPL) subsidiary, which is working on a “30 by 30” plan to install 30 million solar panels (a 10GW pipeline all in all) across the US state by 2030. Over 2019, the firm completed the 74.5MW Okeechobee solar complex.

Further Florida developments are “progressing well”, said NextEra CFO Rebecca Kujawa. Construction of a 750MW pipeline across ten projects is “on track and on budget” to start supplying FPL customers in early 2020, added Kujawa, who is also an executive VP.

Another of the group’s Florida-based subsidiaries – utility Gulf Power, which may merge with FPL in the future – is too working to deliver its own solar debut. The so-called Indigo Solar Energy Center, boasting some 75MW in capacity, should go online later in Q1 2020.

Storage, a business ‘in its own right’

As CEO Jim Robo noted, over 50% of all solar capacity added to the project pipeline in 2019 features a battery element. “The current backlog has more than 2,000 megawatts of trifecta projects that combine wind, solar and battery storage together,” the executive added.

The firm, Robo anticipated, may follow by embracing storage even more decisively. “We also increasingly see storage as an important stand-alone business in its own right as we are reviewing a number of opportunities to add storage to our existing solar sites,” the executive said.