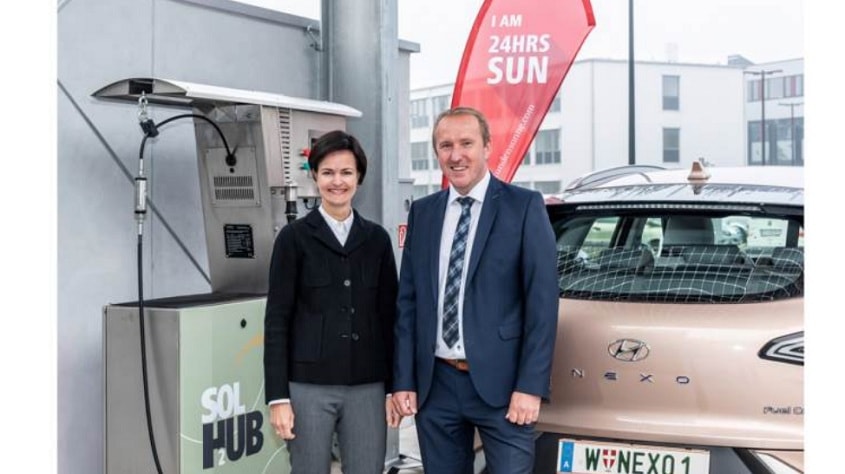 The system uses solar energy to produce clean hydrogen, which can be used to power vehicles with fuel cells. For Fronius, the project represents another step towards the company’s vision of “24 hours of sun”.

Hydrogen has an important role to play in sector integration, that is to say the efficient use of renewable energy for electricity, heat and mobility. For this reason, Fronius is working on solutions for the production of green hydrogen, generated using excess solar energy from photovoltaic systems. With the SOLH2UB refuelling station in Thalheim bei Wels, the company is now demonstrating just how well this approach works.

The trial run of the pilot system has been in operation at the Fronius development site since May. It produces hydrogen largely from excess solar energy using electrolysis – this hydrogen can then be used by on-site fuel cell vehicles or it can be stored for reconversion into electricity and heat. The components required, such as electrolysis systems and stationary fuel cells, have been developed by Fronius.

The system will begin normal operation at the official opening in the middle of October. “SOLH2UB serves as a central hub for solar energy and enables the innovative integration of the electricity, mobility and heat sectors,” explains Martin Hackl, head of Solar Energy at Fronius International GmbH. “We are convinced that hydrogen has the potential to be the energy source of the future and drive forward sector integration, as well as the energy revolution.”

Attractive solution for local authorities and businesses
“The SOLH2UB is enabling truly green hydrogen to be obtained from solar energy for the first time,” adds Thomas Rührlinger from Business Development Hydrogen Solutions, “and in the very place where it will be used.”  This offers a number of advantages for organisations such as businesses, industrial facilities and local authorities: hydrogen can be stored easily and then used to operate vehicles with fuel cells on-site, or it can be converted back into electricity as necessary using a stationary fuel cell. The heat created by the production of hydrogen as well as by the reconversion process can be used on-site. Another plus is that strain on the grids is reduced, as the electricity is largely consumed in the very place where it is produced.

Hydrogen as a fuel for vehicles with high energy requirements
Hydrogen has huge potential in the mobility sector for vehicles that require large amounts of energy, such as municipal vehicles, vans, buses and HGVs. The energy source promises long ranges and short refuelling times for vehicles, and is obtained from 100% renewable sources. “Solar energy powers the vehicles,” says Hackl. “And the only thing they produce is steam!”