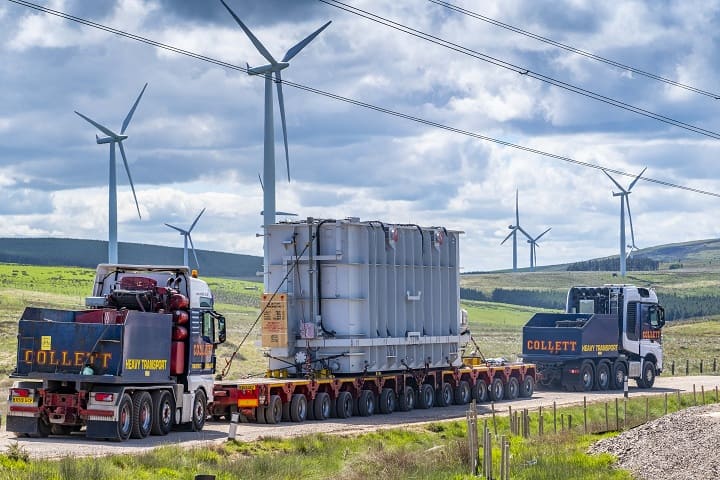 Collett were contracted with the full scope of work providing a door-to-door service, including the project management, engineering and the transport of the two 160Te shunt reactors.

The shunt reactors were transported in three stages before arriving at the substation site. First, Collett worked in partnership with a trusted European partner to transport the shunt reactors ahead of their arrival in the UK. The Collett Projects Department were then responsible for all port operations including the loading of the vessel, also chartered by Collett, for the 4800 miles to the Port of Leith in Scotland.

Working closely with the port, Collett carefully planned the cargo’s discharge, including providing crane lifting plans and an agreed programme of works for all loading and discharge operations.

Once at the port, utilising an 800Te crane, the shunt reactors were discharged onto a dedicated 14-axle line modular flat top trailer. Both shunt reactors were offloaded at the port onto stools for temporary storage. Collett also transported and stored multiple ancillary components at their port side depot in Grangemouth.

Utilising their 550Te capacity girder bridge with 20-axle lines, Collett transported the shunt reactors from Leith Docks to Innerwick. Due to narrow access along the remainder of the route, Collett transhipped each of the two shunt reactors from the 20-axle girder bridge on to a 14-axle flat top modular trailer in a dedicated road closure area, complete with all traffic management, in order to complete delivery. All movements were facilitated under police escort, as well as Collett’s in-house fleet of pilot vehicles.

At the NnG onshore substation site, located in the Lammermuir Hills, Collett’s Heavy Lift Team offloaded and positioned the shunt reactors into their final position using a hydraulic jacking and skidding system.

Part two of the project is expected to take place in the coming weeks , when two 180Te supergrid transformers are due to be delivered to the wind farm site.

More about Collett & Sons Ltd: Experts in Motion since 1928 Collett have a wealth of experience transporting difficult and abnormal loads throughout the UK, Europe and worldwide. Their specialist fleet operates across depots in Halifax, Goole, the Port of rangemouth, and most recently Collett (Ireland) Ltd in Dublin. Experts in the transport of abnormal loads, Collett are your global professional partner for transport, heavy lift, marine & transport consulting.