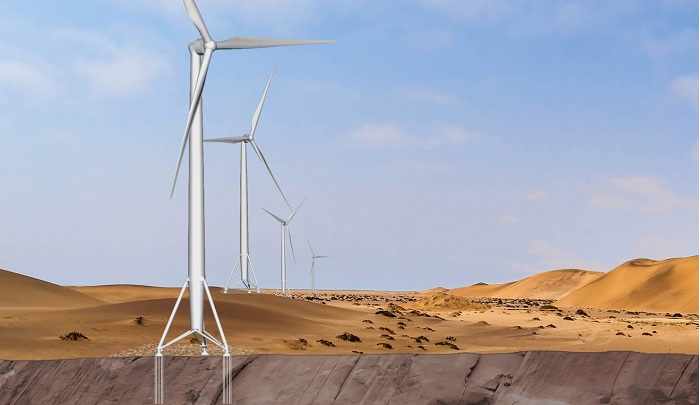 BladeRunner, the new blade installation and de-installation system developed and patented by Nabrawind Technologies, reduces the cost of blade replacement by 70% compared to maintenance operations carried out with cranes. The Spanish company’s new product is applicable to all types of blades up to 80 meters long and has been successfully validated in a maneuver carried out at a wind farm owned by the French developer Innovent in Bignan (France).

During the manoeuvre in France, which consisted of replacing a damaged blade with a new one, all the advantages that the BladeRunner will bring to the blade maintenance and installation sector were confirmed.

First of all, the logistics of the BladeRunner are very simple. Its small dimensions and low weight (not exceeding 1.000 kilograms) allow it to be transported in a van, so it can be moved with great agility.

Only a team of four people is required to operate it, and they are capable of replacing a blade or assembling a complete rotor in just three days.

The system is based on the installation of small equipment on the hub of the wind turbine, which is used to directly manipulate the blade, which ascends and descends in a vertical position. The system is connected directly to the inserts or T-Bolts of the blade root, which avoids exerting force on its aerodynamic surface, eliminating the risk of cracks appearing in the handling area, which are becoming increasingly critical as the blades grow in weight and size.

The product complements the catalogue of Nabrawind, which already has wind turbine towers being installed in projects in Morocco and Namibia and modular blade systems, the first of which is already under development.

Ion Arocena, Program Manager of Nabrawind, has highlighted the &quot;excellent result of our first manoeuvre and the good commercial reception&quot; of the BladeRunner, which has aroused great interest in all the companies that &quot; we have been informing about the development of the product&quot;. In this sense, Arocena praised the work of Innovent, which from &quot;the first moment bet on the product and has collaborated very actively in the validation process of the BladeRunner.

Meanwhile, Gregoire Verhaeghe, CEO of Innovent, expressed his confidence &quot;in the potential of the BladeRunner&quot; and at the same time said he was &quot;convinced that Innovent and Nabrawind will continue to collaborate on projects in the near future.

About Nabrawind Technologies
Nabrawind Technologies S.L. is a company from Navarre, with SODENA as a shareholder, which designs and develops advanced wind technologies. It was founded in 2015 with the aim of developing two patents that the promoters had applied for in the parent company Evoluwind S.L.

The two products are Nabrajoint and Nabralift. The first consists of a modular blade joint compatible with any blade and whose assembly can be carried out at the foot of the wind turbine in a short period of time. The second is a self-erecting tower that can reach a height of 200 meters without the need for large cranes. Nabrawind has already signed the first contracts for both Nabrajoint and Nabralift. The first self-erecting towers will be installed on the African continent, specifically in Namibia and Morocco. The latter project involves the installation of the tallest wind tower in Africa, with a hub height of 144 meters. At the same time, the Spanish company is developing a modular blade called Nabrajoint for one of the world&#39;s leading OEMs.

About InnoVent
InnoVent is an independent French renewable energy development company operating in France and Africa, founded in 2001. Thanks to its team of 90 people, InnoVent masters the entire development chain, from preliminary studies to operations and maintenance, including financing. InnoVent achieved consolidated revenues of 55 million euros in 2020. So far, InnoVent has installed 48 wind farms in France, i.e. 173 wind turbines, mainly in Northern France, Brittany and Normandy. Over the past 10 years, InnoVent has expanded its activity in Africa, where the company is now present in fifteen countries (Namibia, South Africa, Senegal, Benin, Kenya, etc.), including Morocco. In total, InnoVent has developed 600 MW in France and Africa since its creation, including 300 MW wholly owned.