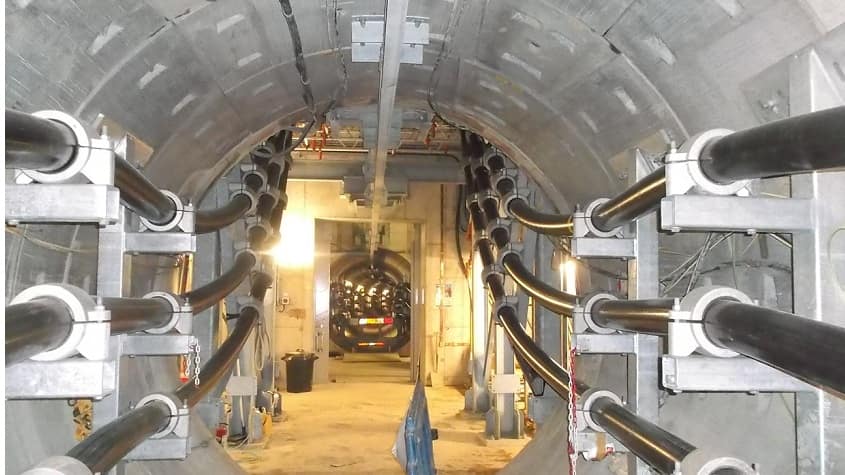 HRH The Prince of Wales took a stroll down London’s new energy superhighway when he descended deep beneath the capital’s streets to visit National Grid’s London Power Tunnels project.

Whilst The Prince was deep underground, Her Royal Highness was shown around the substation and was able to see down the 32 metre deep shaft leading into the tunnels.

National Grid has recently flicked the switch to energise over 200km of high voltage electricity cables carried inside a network of 32km of tunnels as part of a seven year project to rewire the capital.

The £1bn project has been delivered on time and under budget; and is the most significant addition to London’s electricity system since the 1960s.

The tunnels, running from Hackney in the east to Willesden in the west, and from Kensal Green to Wimbledon in the south also house some of the local electricity network company’s cables too. This is a first, and has saved both money and disruption for the capital’s motorists.

John Pettigrew, National Grid’s Chief Executive said: “We are delighted to have been able to show The Prince of Wales how this £1bn project has enabled us to rewire London to make sure the capital and those living in it have the electricity they need to rise to the challenges of the 21st century.”

Greg Clark, Business and Energy Secretary said: “The £1 billion London Power Tunnels is exactly the type of investment and innovative infrastructure project that the Government wants to encourage through our modern Industrial Strategy.

“This important infrastructure will help increase productivity by cutting the number of road works needed for maintenance, as well as powering London with the safe and reliable electricity supplies it needs for the future.”

HRH The Prince of Wales and HRH The Duchess of Cornwall arrived at Highbury substation, one of two new substations built as part of the project, to begin their tour.

While the Duchess heard more about the project from construction workers and had a chance to meet local school children, The Prince of Wales climbed down 16 flights of stairs into the tunnel to see the some of the cables which, stretched out, would run the length of the M25.

His Royal Highness has a longstanding interest in STEM (Science Technology, Engineering and Maths) subjects and helping get young people into engineering, and also set up the Industrial Cadets scheme in 2010.

National Grid worked closely with communities and schools and with the charity City Year to promote science and engineering along the 32km route of the tunnels. During the visit, Her Royal Highness met local school children who were enjoying a special science lesson.

Over the past seven years, National Grid has helped promote STEM to over 30,000 school pupils.

National Grid’s decision to place the new cables in tunnels underground helped avoid major disruption on the city’s streets. During construction, workers used electric cars above ground and bicycles in the tunnels below to reduce traffic emissions too.