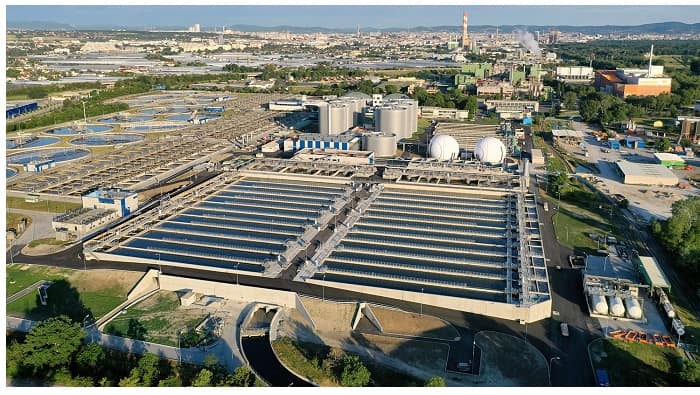 The E_OS (Energy Optimization through Sludge Treatment) project on the edge of Vienna is a pioneering facility designed to transform the Austrian capital’s wastewater treatment plant from a major energy consumer into a net producer. Important parts of the project therefore include maximizing energy efficiency and optimizing power generation, both of which were supported by Sulzer’s expertise.

Under construction since 2015, the project replaces the original primary sedimentation and aeration basins with a more compact but higher volume system. The new anaerobic digesters and a combined heat and power (CHP) plant have been built on the space that has been vacated. The facility now produces around 78 GWh of electricity and 82 GWh of heat, meaning the plant will be able to generate all the energy it requires for wastewater treatment, with energy to spare while reducing Vienna’s annual carbon emissions by 40’000 tonnes.

Vienna’s old wastewater treatment plant consumed around 60 GWh of electricity every year, more than 1% of the city’s largest energy producer. With the E_OS project, the city’s water utility ebswien wanted to turn biogas production using sewage sludge from a “nice to have” into the core of a truly sustainable, self-powering facility. At the center of the upgraded plant are six 30-meter high digesters, each capable of generating biogas from 12’500 cubic meters of sludge.

Beyond boosting the plant’s energy output, the project’s engineers also wanted to ensure that processes across the site were designed with maximum energy efficiency in mind. It was the search for efficient, reliable solutions that brought the team to Sulzer. With decades of experience in water and wastewater treatment applications, Sulzer specialists were able to suggest a number of smart solutions that helped ebswien reduce its energy consumption and improve equipment across the site.

The first of those solutions was the mixer units for the digester tanks. These giant mixers continually stir the sludge in the tanks to keep the anaerobic digestion process running optimally. Sulzer’s proposal involved the use of a large, 4.5 meter diameter Scaba vertical agitator, rotating at a low speed of only 8 rpm. With that configuration, the Scabas would only require small 11 kW motors.

To meet the project’s performance specifications, the Scaba units would need to achieve 90% homogenization of a tank in a maximum of two hours. When the first unit was installed on site, tests conducted by the Vienna University of Technology, the project’s academic partner, showed that the 90% point was reached after only one hour and seventeen minutes.

A further benefit of the Sulzer Scaba is its free-hanging design. The agitator blade is suspended from a 25-meter shaft with no bottom bearing. This ensures that any fibrous material in the sludge can travel down the shaft with the natural movement of the material and fall off the bottom, eliminating the risk of tangling and jamming in operation.

In addition to the solution for the digester tanks, Sulzer also delivered further savings in the new aeration lanes. During the water treatment process, air oxygenates the water through an array of fine-bubble diffusers. In conversations with the project team, Sulzer’s engineers learned that their planned air supply configuration used three large 1.2 MW compressors.

After analyzing the pressure and flow requirements, Sulzer suggested that the required output could be delivered using eight smaller 400 kW HST turbocompressors. The alternative configuration reduced total power consumption by 400 kW, while the rugged HST compressors also offered quieter operation, high availability and very low maintenance costs. For this part of project, Sulzer delivered the compressors along with custom-designed diffusers and the associated pipework.

Making major changes to an operational wastewater treatment facility is always a challenge, especially when that site serves a major city and processes up to 1’000 cubic meters of wastewater per minute. The Sulzer team worked closely with the project engineers to match delivery, commissioning and testing of the new equipment with their phased construction timeline. The aeration lanes have now been operating efficiently for three years and the E_OS project has been completed on time, bringing the sludge treatment plant to full operation.

Sulzer is a global leader in fluid engineering. We specialize in pumping, agitation, mixing, separation and application technologies for fluids of all types. Our customers benefit from our commitment to innovation, performance and quality and from our responsive network of 180 world-class production facilities and service centers across the globe. Sulzer has been headquartered in Winterthur, Switzerland, since 1834. In 2020, our 15’000 employees delivered revenues of CHF 3.3 billion. Our shares are traded on the SIX Swiss Exchange. The Pumps Equipment division specializes in pumping solutions specifically engineered for the processes of our customers. We provide pumps, agitators, compressors, grinders and screens developed through intensive research and development in fluid dynamics and advanced materials. We are a market leader in pumping solutions for water, oil and gas, power, chemicals and most industrial segments.