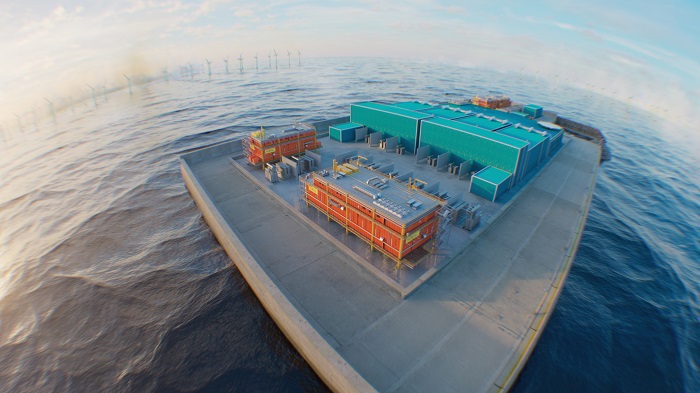 The world’s first artificial energy island’s system operator, Elia, has unveiled its preliminary designs in front of the federal ministers of Belgium, Tinne Van der Straeten-Energy and Vincent Van Quickenborne-North Sea. The second offshore wind zone’s offshore wind farms, which will have a max capacity of 3.5 GW, will be connected to the onshore high-voltage grid by the Princess Elisabeth Island, which will be situated around 45 km off the Belgian coast. The energy island will also be the first component of a new, central hub for interconnectors with the UK and Denmark, creating a European offshore electricity system. The island is a creative triumph that once more establishes Belgium as a leader in offshore energy.

The Princess Elisabeth zone will be developed in the Belgian portion of the North Sea according to the Maritime Spatial Plan for Belgium (2020–2026). Under the Belgian Electricity Act, Elia is in charge of expanding the transmission grid in accordance with plans that need to be authorised by relevant ministers. The first energy island’s preliminary blueprints are now complete, and the tendering procedure is getting ready.

The Princess Elisabeth Island will be the first artificially created island powered by energy. It will be a groundbreaking feat of innovation that combines both alternating current and high-voltage direct current (HVDC) (HVAC). The wind farm export cables from the Princess Elisabeth zone will be bundled together by the island’s high-voltage infrastructure, which will also act as a hub for upcoming transmission lines with the UK-Nautilus and/or Denmark-TritonLink. These will be hybrid interconnectors, which are more effective because they serve two purposes. They will make sure that electricity is exchanged across nations and will be connected to massive offshore wind farms in the North Sea that will supply our nation with a significant amount of green energy.

The energy island will be around 45 kilometres off the coast and take up about five hectares of space above the water. Sand-filled concrete caissons will be used to build the man-made island, which will be erected in the Princess Elisabeth wind zone. The island will primarily host the transmission facilities that connect to brand-new wind farms with a maximum capacity of 3.5 GW and make up the links to upcoming interconnectors. For maintenance workers, a small harbour and a helicopter pad will also be constructed. There will be a requirement for 60 km of direct current cables and 300 km of alternating current cables to link all future offshore facilities to the Belgian high-voltage grid. The post-COVID-19 recovery plan that Belgium requested the European Commission approve will provide support for the energy island in the form of a subsidy of about €100 million.

Along with developing the environmental assessment, preparing the permission procedure, and applying for a concession of public space, the island’s tendering process is now being prepared. The island’s construction is scheduled to begin in 2024, and it should be finished by mid-2026. The creation of the energy island’s electrical infrastructure will then commence. The government is organising the building of the next wind farms through a series of tenders. The commissioning of two onshore grid reinforcement projects, the Ventilus and Boucle du Hainaut, is related to the linking of the wind farms to the Elia grid. By 2030, Elia wants to reach its full connectivity capacity.

The energy shift has advanced significantly as a result of Princess Elisabeth Island. The island will serve as the first hub in a European offshore electricity system, in addition to delivering 3.5 GW more of offshore wind energy to shore. They will be able to take advantage of the North Sea’s enormous offshore wind potential, Elia Group CEO Chris Peeters remarked.

As part of the recovery strategy for Europe, ideas for an energy island were created. The development of offshore wind has received more attention from the Federal Government. They are converting the North Sea into one massive green power plant thanks to the inaugural energy island, new connections, three new wind farms in the North Sea, and the restarting of the first offshore wind zone. By increasing offshore wind power by four times by 2040, they can further achieve energy independence, lower energy costs, and cut CO2 emissions, said Energy Minister Tinne Van der Straeten.

Their nation’s energy independence is increasingly being driven by the North Sea. But recently, with the sabotage assaults on the North Stream gas pipelines, it has been more important than ever for them to safeguard such vital infrastructure against sabotage and attacks. They will protect both the energy island and the lines that carry electricity to the mainland against these kinds of occurrences. A bill that dramatically tightens such measures has been passed. They now have provisions for the deployment of drones, video surveillance at sea, tracking foreign vessels in local seas, and having qualified agencies conduct routine safety studies, North Sea Minister Vincent Van Quickenborne remarked.