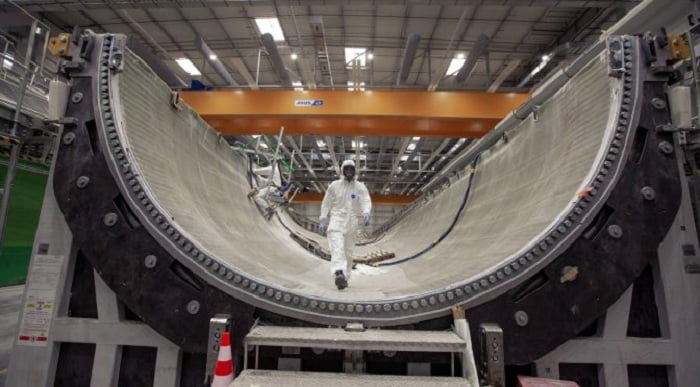 The company will recruit and train 200 new employees, taking the site’s total workforce to 800. Additionally, GE Renewable Energy plans to expand the site with the construction of an additional hall for finishing blades. Cherbourg plant has established as a world-class facility, having produced the first ever wind turbine blade longer than 100 meters.

LM Wind Power, a GE Renewable Energy business announced today the launch of its second 107-meter wind turbine blade mold (production line) at its Cherbourg factory in France, in order to address the industry’s demand for offshore wind turbine blades. The second mold has been through the prototype phase and will now start operations.

Additionally, GE Renewable Energy will be further investing in upgrading the plant. The company is planning an extension of the site, with the construction of an additional hall for finishing blades (post-molding) before they are shipped.

Olivier Fontan, President and CEO of LM Wind Power, said: “Our teams here in Cherbourg are thrilled to take an active role in the energy transition and to be part of the successful journey for GE’s Haliade-X offshore wind turbine. The arrival of the second 107-meters mold at the factory marks an increased activity for LM Wind Power in Cherbourg, and we are happy to welcome a large wave of new employees, allowing us to participate in social development and create more jobs in the surrounding community.”

The Cherbourg team is mostly looking to expand its production workforce, with positions that are open to all profiles and backgrounds. The site will also be looking for production supervisors, quality controllers and maintenance technicians. The expanded production workforce will allow LM Wind Power to meet the growing offshore wind industry demand.

The factory currently has about 600 employees, with 34 percent being women. The facility became the first wind turbine blade manufacturing site in France when it was opened three and half years ago in April 2018.

LM Wind Power, a GE Renewable Energy Business, is a world leading designer and manufacturer of rotor blades for wind turbines, with a global manufacturing footprint that includes blade factories in Brazil, Canada, China, India, Poland, Spain, France, Turkey and the United States. The company has produced more than 241,000 blades since 1978, corresponding to more than 121 GW installed capacity and global savings of 251 million metric tons of CO2 annually. In 2018, LM Wind Power became the first carbon neutral business in the wind industry.

GE Renewable Energy is a $16 billion business which combines one of the broadest portfolios in the renewable energy industry to provide end-to-end solutions for our customers demanding reliable and affordable green power. Combining onshore and offshore wind, blades, hydro, storage, utility-scale solar, and grid solutions as well as hybrid renewables and digital services offerings, GE Renewable Energy has installed more than 400+ gigawatts of clean renewable energy and equipped more than 90 percent of utilities worldwide with its grid solutions. With nearly 40,000 employees present in more than 80 countries, GE Renewable Energy creates value for customers seeking to power the world with affordable, reliable and sustainable green electrons.