LEITWIND was commissioned by b.ventus, in which the LEITNER Group holds a participating interest with the German E.ON Group, to develop a wind turbine with 250kW power output for the German market.

The wind turbine design differs from all other products on the market. With its big rotor diameter of 42m and the low power output of 250kW, the specific energy reaches a level of 180W/m² which makes the turbine perform perfectly also on sites with very low average wind speeds. The low total height given by the 30m tower allows a simplified permitting process and an installation closer to buildings than for conventional wind turbines.

The turbine uses the well proven and patented LEITWIND DirectDrive Technology similar to the LEITWIND MW-class products, which are installed all over the world. Design assets as active electrical pitch and yaw regulation, control and protection system as of MW class turbines, LEITNER DirectDrive generator and the LEITNER full power IGBT power converter LeitDrive make the turbine an avant-garde product in its class.

The turbine´s most specific asset is however its grid connection concept. The turbine connects to a 400V low-voltage grid, directly to the dispatching unit of the customer. So the major part of the produced energy will be used in own-consumption by the customer itself what increases highly its profitability and makes it independent from public feed in tariffs. These attributes make the turbine especially interesting for small and medium-sized enterprises, which present the main target group of this product.

The first prototype of the turbine will be installed in fall 2018 on a site in the south of Germany. b.ventus offers a complete package including permitting, construction, grid connection, maintenance and insurance for the 250kW turbine. To produce his own green energy the customer has nothing to do except to commission b.ventus. In Germany, customers benefit twice: as a self-sufficient consumer – in terms of self-consumption – their energy consumption is exempted from the feed-in tariffs by means of renewable energies.

b.ventus business concept is a perfect fit for LEITWIND’s strategy, as wind turbines must be able to connect to the local energy network, as well as offering high efficiency. The power is supposed to be available directly, without needing to transport the electricity from one place to another. That avoids high infrastructure costs and network losses. 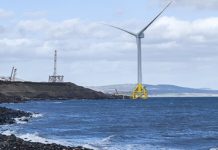