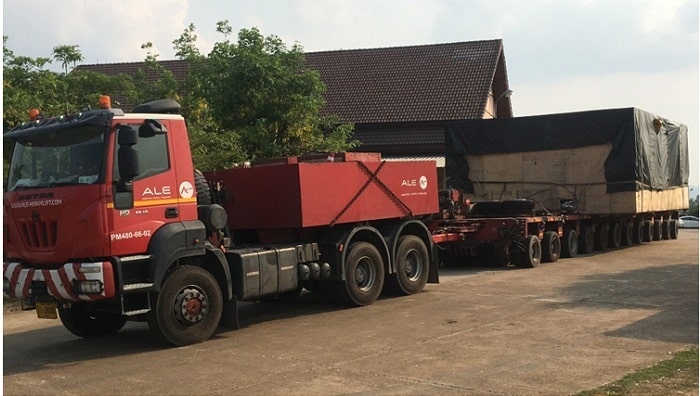 ALE completed the first phase of a project for Hansa Meyer Global Transport GmbH & Co.KG that will help Laos achieve its target of 100 hydroelectric plants by 2020. Through this drive, the country is looking to reduce its dependence on fossil fuels and enhance economic prosperity through the sale of energy to neighbouring nations.

The scope of this work began at the port of Laem Chabang on the bay of Bangkok, where ALE received an initial cargo of two 88t modules and a further 66t module. From here, the equipment was transported approximately 1,000km through often challenging road conditions to the Thai/Laotian border on the Mekong river.

Here, ALE’s engineering team had arranged for a local barge supplier that had met its rigorous HSQE standards to arrange passage across the river. One by one, the modules were transported into Laos, before being unlashed and transported to the power station site.

ALE acted as the single point of contact for this operation, mobilising expertise in its Thailand and UAE locations to undertake detailed route surveys and liaise with local authorities to minimise disruption. It arranged a third-party marine warranty surveyor (MWS) and non-destructive testing (NDT) to verify the barge’s suitability, and for augmentation work to weld lashing eyes, allowing each trailer to be moored correctly.

For this project, 48 axle lines of conventional trailers were used, along with five ballast tractors to pull each abnormal load. Various mooring equipment was also used to secure the barge, which itself measured 15 x 54m.

By the spring of 2020, thanks in part to ALE’s work, Laos will gain another operational plant, and so will have further reduced its dependence on coal and gas power.

ABOUT ALE
ALE has a Smarter, Safer, Stronger solution to any heavy transportation or lifting challenge, no matter how complex.

Over the coming year, this project will involve the transportation of some 166 modules along the same route, including a pair of 235t transformers later this year. This project builds on successful work undertaken with the same client previously during the construction of other hydroelectric power plants.