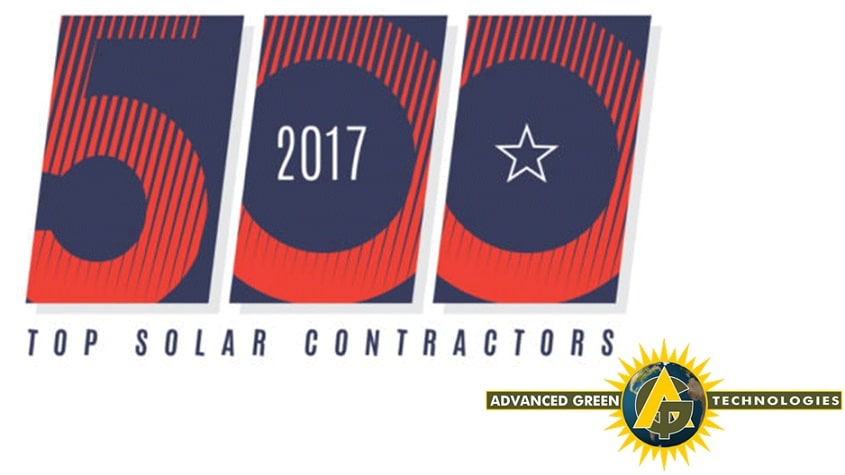 Advanced Green Technologies (AGT), a leading provider of solar energy system engineering, procurement, and construction solutions earns the Top Commercial Solar EPC ranking in the State of Florida for the sixth consecutive year, and 48th in the nation by Solar Power World for 2017, the solar industry’s leading media resource.

The top solar contractors’ list was created by Solar Power World to offer the industry an inside look at how solar companies stack up against one another. Starting with only 100 contractors in 2011 the list has grown to 500 in 2017 and is compiled based on the total kilowatts installed for each of the company’s customers.

With more than 13.4 Megawatts installed in 2016, AGT leads the industry as the highest-volume commercial solar EPC in the State of Florida and 48th in the nation. To achieve this ranking, AGT completed many prominent projects last year including a 2.25 Megawatts Solar Carport for Lockheed Martin in Orlando, Florida and a 2 Megawatts Solar Farm for the city of Lake Worth.

“It’s a great honor to be recognized as the top commercial solar EPC in the state of Florida six years in a row,” said AGT President Michael Kornahrens.” As we continue to grow and push the limits of what is possible in the state of Florida, I am incredibly thankful for my team’s hard work and dedication to making AGT one of the best solar companies in the state.”

AGT reminds commercial building and business owners the most significant financial incentive for installing solar; the 30% Federal Solar Tax Credit will be reduced at the end of 2019. Currently, you can subtract 30% of all solar energy system installation costs directly from your federal income tax payments, making for a quick return on investment. The 30% Solar Investment Tax Credits will be reduced to 26% in 2020, and 22% in 2021 before dropping permanently to 10% for commercial projects and 0% for residential projects. Also, the bill includes language to allow project owners who start construction before the end of 2021 to be allowed a larger credit following the completion of their project, as long as it’s in service before the end of 2023. Now is the time to begin on the path toward energy independence, financial savings, and environmental sustainability.